Manchester City like the look of RB Leipzig manager Julian Nagelsmann or former Tottenham boss Mauricio Pochettino as possible replacements for Pep Guardiola. The Spaniard is in the final year of his contract. (Mail)

Juventus and Argentina striker Paulo Dybala, 26 - who has been linked with Tottenham and Manchester United - is in talks over a new deal with the Italian club. (Sky Sports)

France striker Kylian Mbappe, 21, plans on winning the Champions League at Paris St-Germain before moving on to a "big club", according to former PSG midfielder and current club ambassador Youri Djorkaeff. (Goal)

Poland striker Arkadiusz Milik, who looked set to join Juventus next summer, could leave Napoli in January, with Tottenham and Everton interested in the 26-year-old. (Calciomercato via Mail)

Manchester United missed out on signing RB Leipzig's 21-year-old France defender Dayot Upamecano - now valued at about £55m - because of a row over £200,000 five years ago. (Sun)

From 9-0 to fifth in the table

How manager Hasenhuttl has turned Southampton around

Arsenal boss Mikel Arteta says he has been "honest" with out-of-favour German midfielder Mesut Ozil, 32, despite the player's agent claiming there has been a lack of transparency over his exile from the squad. (Mirror)

Liverpool may decide not to sign a centre-back in January and wait for a longer-term prospect next summer, despite the serious injury to 29-year-old Netherlands defender Virgil van Dijk. (Liverpool Echo)

Real Madrid will only offer Spain centre-back and captain Sergio Ramos a one-year contract extension but the 34-year-old wants to sign for another two years. His current deal expires next summer. (AS - in Spanish)

Newcastle's England midfielder Jonjo Shelvey, 28, is facing further assessment on a hernia injury that is set to lead to an operation. (Newcastle Chronicle)

Brighton's England midfielder Adam Lallana, 32, says when he realised he was no longer required at Liverpool he treated every day at Anfield "like it was my last". (Liverpool Echo)

Juventus and Barcelona are interested in Ajax and Netherlands Under-19 midfielder Ryan Gravenberch, 18. (Tuttosport - in Italian) 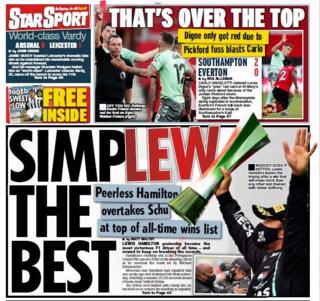