Former Tottenham boss Mauricio Pochettino and current Real Madrid reserve team boss Raul are contenders to take over at the Spanish giants if they decide to sack Zinedine Zidane. (AS)

Arsenal's out-of-favour ex-Germany midfielder Mesut Ozil could move to the MLS in the United States, with DC United interested in the 32-year-old. (Sun)

Arsenal are considering a potential deal to re-sign Donyell Malen, 21, from PSV Eindhoven, three years after they sold the Netherlands striker from their youth ranks for £540,000. (Soccernews, in Dutch)

Argentina keeper Sergio Romero, 33, found out via social media he had been left out of Manchester United's Premier League squad and wants to speak to the club about his treatment. (Star)

Everton's deal to sign England striker Dominic Calvert-Lewin, 23, from Sheffield United in 2016 was "a lot less" than the reported £1.5m, according to Toffees under-23 boss David Unsworth. (Sky Sports, via Mail)

Is China a factor in Mesut Ozil's exile from Arsenal squad?

The reasons behind the China suggestions

Everton's unsettled Bosnia midfielder Muhamed Besic, 28, will not push for a move to Portugal - the last major European league with an open transfer window - and will wait until January to decide his next club. (Liverpool Echo)

Barcelona defender Gerard Pique, 33, agreed to lower his pay by 50% for the rest of this season, because of the financial impact of the coronavirus crisis. (Sport)

Arsenal have given a trial to the son of their former Netherlands forward Dennis Bergkamp. Mitchel Bergkamp, 22, has spent the week training at London Colney with Steve Bould's under-23 side. (Goal)

Werder Bremen chief Clemens Fritz insists 20-year-old Dutch winger Tahith Chong, who is on loan at the German club from Manchester United, will get plenty of first-team football after making only one start so far this season. (Deichstube, in German)

Newcastle have offered French triallist striker Florent Indalecio, 23, a contract until the end of the season. (Newcastle Chronicle)

Former Scotland midfielder Darren Fletcher, 36, is back at Manchester United in a temporary coaching role to help his development. (Manchester Evening News)

Aston Villa's Scotland midfielder John McGinn, 26, says he is feeling back to full fitness after a difficult opening season in the Premier League. (Birmingham Mail)

Fans will be able to watch West Ham's match against Manchester City this weekend in a cinema just a stone's throw from where the game will be taking place in an empty stadium. (Times - subscription required)

Football's lawmakers have agreed to January trials for concussion substitutes before their potential introduction from the start of next season. (Mirror) 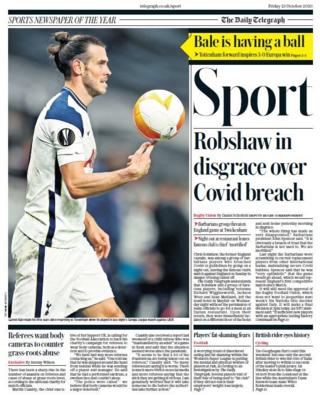