West Ham have agreed a £30m deal with Brentford to sign forward Said Benrahma, 25, but still have to agree personal terms with the Algeria forward. (Sky Sports)

Manchester United's Argentine goalkeeper Sergio Romero, 33, wants to be released from his contract by the end of the month and is interested in moving to Major League Soccer in the United States. (Sun)

Crystal Palace are close to completing a short-term deal for right-back Nathaniel Clyne, 29, who is a free agent after leaving Liverpool in the summer. (The Athletic)

Manchester United and Spain midfielder Juan Mata, 32, rejected an offer worth £200,000 a week from a team in Saudi Arabia. (Sport)

Smethurst takes over Macclesfield as Savage joins board

Sevilla and France Under-21 defender Jules Kounde, 21, is on Manchester United's radar ahead of a January move. (ESPN)

Italy's former Manchester City and Liverpool forward Mario Balotelli, 30, who is a free agent after leaving Brescia, will sign for a new club "in a few weeks". (Goal)

Switzerland forward Shani Tarashaj, 25, has returned to Everton after his loan spell at Dutch side FC Emmen was cancelled. (Liverpool Echo) 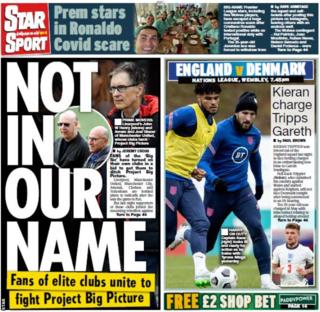