Algeria striker Said Benrahma's £25m move from Brentford to West Ham is in danger of collapse, with the Hammers focused on Bournemouth's Norway forward Josh King, 28. Crystal Palace could make a late bid for Benrahma, 25. (Mirror)

Manchester United could face a battle with Real Madrid for Camavinga. (Star)

Tottenham boss Jose Mourinho has told England of his concerns about plans to start forward Harry Kane, 27, in the Nations League against Denmark on Wednesday. (Guardian)

Who makes your England team to face Denmark?

A number of Manchester United players have expressed their disappointment at the treatment of Argentine goalkeeper Sergio Romero, 33, who has fallen down the pecking order at Old Trafford after the return of Dean Henderson but was priced out of a move on deadline day because of United's insistence on a fee of around £10m. (ESPN)

The father of 27-year-old Arsenal and Ghana midfielder Thomas Partey claims his son was waiting for a "bigger team" to come in for him amid interest from Juventus and Chelsea. (Mirror)

Arsenal's ex-Germany international midfielder Mesut Ozil, 31, who has not played for the first-team since March, was paid a loyalty bonus amounting to £8m at the end of September. (The Athletic - subscription required)

Former Manchester United and Republic of Ireland midfielder Roy Keane, 49, is one of the favourites to become the new Salford City manager. (Mirror)

French defender Frederic Guilbert, 25, has vowed to fight for his place at Aston Villa after revealing he missed out on a move to Nantes during the transfer window. (Express and Star)

Former Manchester City and Brazil forward Robinho, 36, has volunteered to take a wage of just £200 per month on his return to boyhood club Santos for a fourth spell. (Manchester Evening News)

Portsmouth's chief executive Mark Catlin insists there could be new arrivals at Fratton Park before Friday's deadline. (The News)

Barcelona and Spain midfielder Sergio Busquets, 32, says he could talk for "five or six hours" if he was to give his opinion on what has been happening at the club. (Goal) 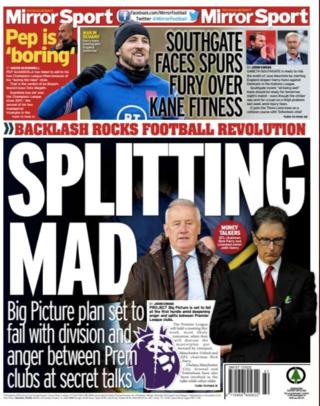