Arsenal want to reopen talks with German midfielder Mesut Ozil, 31, over terminating his contract before the January transfer window. (Mail)

France midfielder Houssem Aouar, 22, says he is not disappointed at missing out on a move from Lyon to Arsenal. (Mail)

From non-league loan to England goalscorer

The rise of Dominic Calvert-Lewin...

French midfielder Michael Cuisance, 21, has dismissed claims a failed medical was the reason for his move to Leeds United collapsing. He eventually joined Marseille, on loan from Bayern Munich. (Sky Sports)

Liverpool will hold talks with winger Harry Wilson over a possible loan move away from the club once the 23-year-old returns from international duty with Wales. (Standard)

Bournemouth will not allow Wales midfielder David Brooks to leave before the end of the domestic transfer window. Sheffield United want the 23-year-old. (Football Insider)

King, whose valuation could be halved to £10m by the Cherries, has ruled out a move to West Bromwich Albion. (Football Insider)

West Ham are targeting a central defender and Bournemouth's Englishman Steve Cook, 29, is among several options being explored. (Star)

United's deal to sign Atalanta's Ivorian winger Amad Diallo, 18, will include a 15% sell-on fee for the Italian club. (Metro)

English full-back Ashley Young, 35, says he would leave Inter Milan and "walk from Italy right now" if it meant he could play for Watford again. (Golden Tales podcast)

Arsenal have started screening their matches for members at Emirates Stadium. They will allow 368 fans into the stadium, who will have to pay £49 per person. (Telegraph - subscription required)

Former Wales midfielder Robbie Savage is said to be one of several businessmen planning to form a phoenix club at the former home of Macclesfield Town, who were wound up last month. (Times - subscription required) 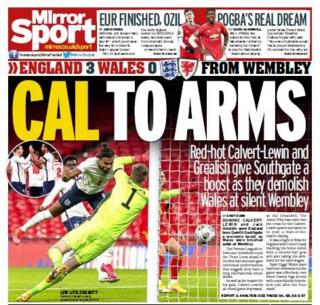