Liverpool received no formal offers for Switzerland winger Xherdan Shaqiri, 28, during the summer transfer window and expect him to stay until January as they will not consider a loan move. (Goal)

Manchester City and England defender John Stones, 26, turned down the option of a loan move to Tottenham Hotspur because he did not want to uproot his family. (Star)

Porto are interested in taking West Ham United and Brazil midfielder Felipe Anderson, 27, on loan until the end of the season. (Sky Sports)

Barcelona have lost more than 200m euros (£181m) in revenue because of the coronavirus pandemic. (Telegraph - subscription required)

French striker Antoine Griezmann, 29, is not happy with Barca manager Ronald Koeman's decision to play him in a wide role. (Mirror)

Paris St-Germain boss Thomas Tuchel is unhappy with the club's lack of activity during the transfer window. (Guardian)

ITV's This Morning presenter Holly Willoughby has criticised Arsenal for ditching their Gunnersaurus mascot in a cost-cutting exercise. (Mirror)

La Liga side Sevilla have announced that they have signed Gunnersaurus, tweeting a picture of the mascot in their kit. (Mail) 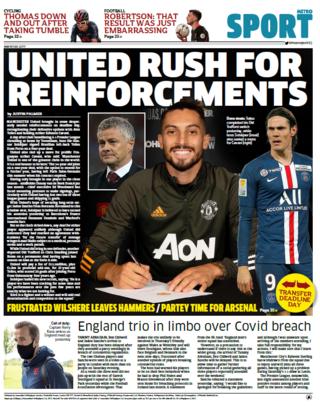