And United fear losing face if another offer for Sancho is rejected by Dortmund. (Mail)

They have also joined the race to sign Real Madrid and Serbia international striker Luka Jovic, 22, on loan. (AS - in Spanish)

Pep Guardiola wants to sign a new left-back before the transfer window shuts with Bayern Munich and Austria's David Alaba, and Ajax and Argentina's Nicolas Tagliafico, both aged 28, on Manchester City's radar. (Mail)

Bayer Leverkusen have made a £9m offer for Arsenal and Bosnia left-back Sead Kolasinac, 27. (Mail)

Lucas Torreira's agent has landed in Madrid for talks with Atletico Madrid over a potential move to Spain from Arsenal for the 24-year-old Uruguayan midfielder. (Fabrizio Romano, via Express)

Chelsea are willing to sell Germany defender Antonio Rudiger and, although Tottenham are interested in the 27-year-old, the Blues would prefer it if he moved overseas. (ESPN)

Brazil centre-back Thiago Silva, 36, says he was "annoyed" by the way Paris St-Germain handled his exit and, even though the French champions offered him a one-year contract extension, it was too late as he had already agreed to join Chelsea. (ESPN) 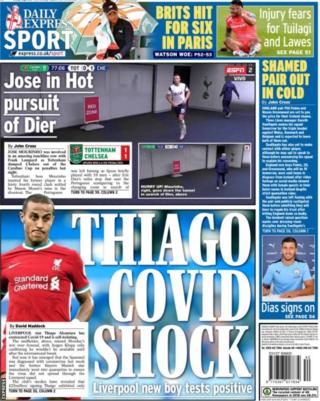