Arsenal are ready to increase their offer to Lyon for Aouar to £36.5m, with a further £9m in potential add-ons. (Football London)

Chelsea will make a formal bid of more than £40m for Declan Rice and believe that will be enough to sign the England midfielder, 21 - because West Ham need the money. (Sun on Sunday)

But the Hammers hope to sign Germany defender Antonio Rudiger, 27, on loan from Chelsea. (Sun on Sunday)

Burnley are tracking Celtic midfielder Ryan Christie and are set to make a bid in the final few weeks of the transfer window. (Sunday Mail)

Torino no longer want to sign Arsenal's Lucas Torreira and although Atletico Madrid remain interested in a loan, the Gunners would prefer a permanent move for the Uruguay midfielder, 24. (Football London)

Manchester United are still in the chase for Porto's Brazilian left-back Alex Telles - and are reportedly confident a deal will soon be agreed for the 26-year-old. (Star)

United have also joined the race for 16-year-old Argentine Alex Luna, who plays for Atletico Rafaela in his home country, and are ready to battle AC Milan for the striker's signature - even though he may not arrive until 2022. (Sunday Mirror)

But Inter's sporting director has played down speculation they are interested in making a move for Kante, who previously played under manager Antonio Conte at Stamford Bridge. (Express)

'Players are not machines'

Liverpool's 20-year-old striker Rhian Brewster wants to speak to Crystal Palace about a potential £20m move, although Sheffield United and Aston Villa are also interested in the England Under-21 international. (Sun on Sunday)

After being in negotiations with Liverpool over Brewster and Arsenal over 19-year-old striker Folarin Balogun, Sheffield United are now looking at signing former England striker Daniel Sturridge, 31, who is a free agent after leaving Trabzonspor in March. (Mail)

Udinese have told Leeds United they will only accept an offer of £40m for Argentine midfielder Rodrigo de Paul, 26. (90 min)

Liverpool will hold talks with Motherwell defender Sam Campbell after they, Leeds United and Brighton had bids accepted for the 16-year-old. (Football Insider)

Rennes midfielder Eduardo Camavinga, who made his France debut this month at 17, is willing to wait until July 2021 to join Real Madrid, with the Spanish giants having already made an approach. (Marca - in Spanish)

Real Madrid want to send Luka Jovic out on loan but former club Eintracht Frankfurt are not interested in a deal for the Serbia striker, 22. (AS - in Spanish)

Hertha Berlin are interested in signing German forward Mario Gotze, 28, after he was released by Borussia Dortmund at the end of last season. (Bild - in German) 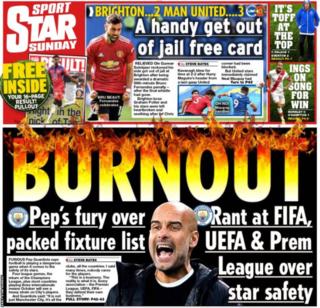