Paris St-Germain are interested in Chelsea defender Antonio Rudiger but are waiting to see if the 27-year-old German will be available on loan or on a permanent basis. (Telegraph - subscription required)

Tottenham are in talks to sign Slovakian defender Milan Skriniar, 25 - but will not be forced into accepting Inter Milan's £55m valuation. (Sun)

Inter will make a move to sign Manchester United and England defender Chris Smalling, 30, if they sell Skriniar to Spurs. (Football Italia)

Sevilla are expecting a second bid from Manchester City for centre-back Jules Kounde and could find it hard to resist an offer in the region of 65-70m euros (£59.4m-£64m) for the 21-year-old Frenchman. (ESPN)

Who are the options as City look to sign right-sided centre-back before deadline?

Arsenal have lodged a £32m bid for Lyon midfielder Houssem Aouar, 22, but the Ligue 1 club want £54m for the France midfielder. (RMC Sport, via Metro)

Aouar has agreed to join the Gunners after no offers emerged from Manchester City and Juventus for his services. (Telefoot, via Mirror)

Liverpool and England Under-21 striker Rhian Brewster is interested in a move to join Sheffield United, with Aston Villa and Brighton also keen onthe 20-year-old.(Sheffield Star)

Hertha Berlin are considering a move for former Germany midfielder Mario Gotze. The 28-year-old, who has played for Bayern Munich and Borussia Dortmund, is currently a free agent.(Goal)

Newcastle United manager Steve Bruce says he did not think about selling Brazilian striker Joelinton, 24, during the summer. (Mirror)

Watford are keen on signing in 25-year-old Sheffield Wednesday centre-half Dominic Iorfa, who is a former England Under-21 international. (Independent) 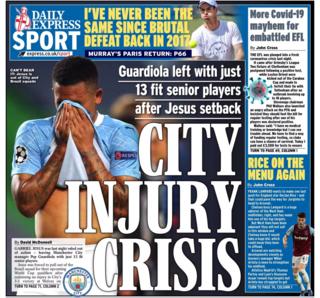