West Ham have told Chelsea that 21-year-old England midfielder Declan Rice is not for sale. (90min)

Chelsea have reached an agreement with French club Rennes over a £22m deal for Senegal keeper Edouard Mendy, 28. (Observer)

Bale back at Tottenham

France midfielder Tanguy Ndombele, who has been linked with Inter Milan and Juventus, has decided to stay at Tottenham after the 23-year-old resolved his issues with manager Jose Mourinho. (L'Equipe, via Football Italia)

Juventus coach Andrea Pirlo says it is "unlikely" Barcelona and Uruguay striker Luis Suarez, 33, will move to the Serie A champions. (Football Italia)

Juventus are looking at bringing Everton and Italy striker Moise Kean, 20, back to the club in a possible loan deal with an option to buy. (Goal)

West Ham are leading the race to sign France right-back Djibril Sidibe from Monaco, with Newcastle United and Wolves also interested in the 28-year-old. (90min)

Barcelona manager Ronald Koeman has told Spanish midfielder Riqui Puig, 21, that he should go out on loan. (Marca) 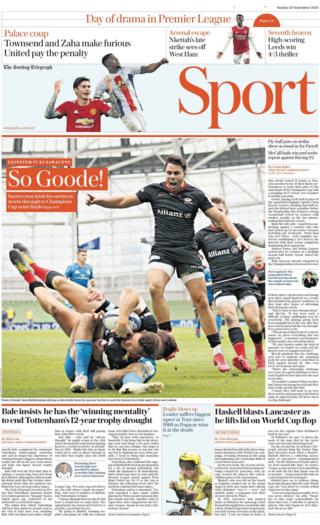