United will need to move quickly to secure the deal as Paris St-Germain have stepped up their interest in Telles. (O Jogo - in Portuguese)

Sections of the Real Madrid dressing room are said to be relieved that Wales forward Gareth Bale is making a loan move to Tottenham Hotspur. (AS - in Spanish)

Rennes want Chelsea to include two players in any deal for Senegal goalkeeper Edouard Mendy, 28. England defender Fikayo Tomori, 22, is one of those the French club want. (Football Insider)

Liverpool have asked about a possible loan deal for France and Barcelona winger Ousmane Dembele, 23. (Sport)

But Crystal Palace also want to sign Brewster from the champions on a permanent deal. (90Min)

Manchester City are considering a deal for Sevilla's French centre-back Jules Kounde, 21. The move could see Argentina defender Nicolas Otamendi, 32, move in the opposite direction. (Telegraph)

Would Lewandowski have won the Ballon d'Or?

Any move away from Southampton for England striker Danny Ings, 28, is "100% not discussable" according to manager Ralph Hasenhuttl. (Daily Echo)

Juventus are interested in re-signing Moise Kean, 20, from Everton with the Italy forward struggling to settle at Goodison Park since arriving in summer 2019. (Goal)

Burnley manager Sean Dyche has described the club's way of working in the transfer market as "last minute" and "tricky". (Mail)

Former Tottenham boss Mauricio Pochettino says it's "a dream" of his to coach Real Madrid. (Cadena Cope Radio - via ESPN)

Leicester manager Brendan Rodgers says winger Demarai Gray has a decision to make over his future and that the 24-year-old will ultimately decide when he leaves the club. (Leicester Mercury)

Crystal Palace boss Roy Hodgson's decision to offer a contract to former England full-back Nathaniel Clyne, 29 - who is back training with his boyhood club - will depend on 19-year-old Nathan Ferguson's recovery from injury. (Football London) 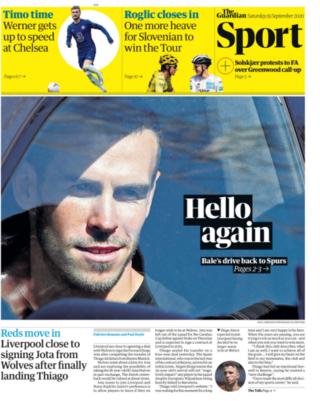