Tottenham Hotspur midfielder Dele Alli has been left out their Europa League qualifier against Lokomotiv Plovdiv, with the 24-year-old England international facing the prospect of leaving the club to make room for the return of Wales forward Gareth Bale, 31, from Real Madrid. (Mail)

Real and Spain left-back Sergio Reguilon, 23, is at Spurs' training ground for a medical before a £25m move. (Evening Standard)

Atletico and Ghana defensive midfielder Thomas Partey, 27, is among Arsenal's main targets but the Spanish club insist they will only sell if the player's £45m buyout clause is met. (Football.London)

Liverpool manager Jurgen Klopp would ideally like to sign one or two more players before the end of the transfer window on 5 October. (The Athletic - subscription required)

Tottenham's England left-back Danny Rose, 30, is set to join Serie A side Genoa having not been given a squad number by Spurs. (Mirror)

Arsenal are tracking Dijon and Iceland goalkeeper Runar Alex Runarsson, 25, with the Gunners hoping a deal can be done for about £1.5m. (Evening Standard)

Bournemouth midfielder David Brooks, 23, looks likely to stay at the club because the Cherries value the Wales international at £50m and do not want to sell. (Sun)

RB Leipzig have threatened to take legal action against Leeds United over their failure to sign 23-year-old French striker Jean-Kevin Augustin. Leipzig claim Leeds were contractually obliged to sign Augustin, who was on loan at Elland Road last season, for £17.7m when they won promotion to the Premier League. (Independent)

England boss Gareth Southgate has been allowed to return to stadiums for Premier League scouting purposes after staying away during Project Restart in 2019-20. (Mail)

Former Tottenham manager Mauricio Pochettino said he only watched 25 minutes of the first episode of the club's All or Nothing documentary. (Independent)

Birmingham City are in talks with Ipswich Town about a £2.5m deal for striker Kayden Jackson. Bournemouth have already had an offer rejected for the 26-year-old Englishman. (East Anglian Daily Times) 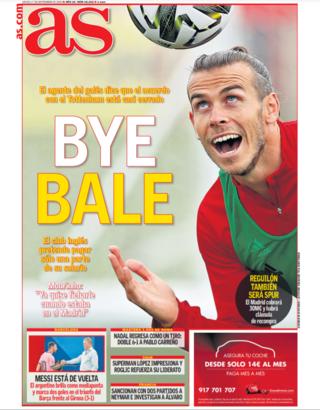 Front cover of Spanish newspaper AS