Tottenham Hotspur could use England midfielder Dele Alli, 24, as a makeweight as they attempt to re-sign Wales forward Gareth Bale, 31, from Real Madrid. (Mail)

The Gunners are still planning to add more players to their squad, with Atletico Madrid's Ghana midfielder Thomas Partey, 27, and Lyon's French playmaker Houssem Aouar, 22, two of their targets. (Mirror)

Bayern Munich are ready to revive their interest in English winger Callum Hudson-Odoi, 19, with the European champions increasingly hopeful Chelsea will listen to offers for their academy graduate. (Mail)

Spurs want to sign Italy striker Andrea Belotti, 26, on loan but Torino will only sanction a permanent move, which would cost nearly £50m. (Express)

Barcelona have said they must sell before being able to complete a deal for Lyon's Netherlands forward Memphis Depay, 26. (Fox Sports Netherlands)

Arsenal will have to sell players to sign 27-year-old Ghana midfielder Thomas Partey, 27, who has a £45m release clause at Atletico Madrid, and French midfielder Houssem Aouar, 22, who Lyon value at £55m. (Star)

Juventus are growing pessimistic about a move for Barcelona's Uruguay forward Luis Suarez, because of delays in the 33-year-old obtaining an Italian passport. (Goal)

Juve are set to abandon their pursuit of Suarez to sign Roma's 34-year-old Bosnia-Herzegovina striker Edin Dzeko - but will try again to sign Suarez in January. (Corriere dello Sport - in Italian)

Dzeko will leave Roma once they have signed Polish striker Arkadiusz Milik, 26, from Napoli. (Corriere dello Sport - in Italian)

The Hammers have rejected a second offer of £400m from an American consortium to buy the club. (Sun) 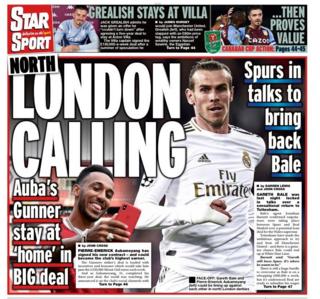