Barcelona have contacted Arsenal over a potential move for Spain defender Hector Bellerin. (Sport - in Spanish)

French champions Paris St-Germain also want to sign right-back Bellerin and have made contact with the 25-year-old's representatives. (Independent)

Rennes have confirmed they are in talks with Chelsea over a deal for Senegal goalkeeper Edouard Mendy, 28. (Goal)

Arsenal are set to make a new bid for 22-year-old Lyon and France midfielder Houssem Aouar, after their initial offer of £31.2m was rejected. (Fabrizio Romano, via ESPN)

Meanwhile, the Gunners are also anticipating a third bid from Aston Villa for Emiliano Martinez as they hold out for close to £20m for the 28-year-old Argentine goalkeeper. (Mail)

Everton and Italy striker Moise Kean, 20, wants to return to Juventus a year after leaving the Serie A giants for the Toffees. (Calciomercato - in Italian)

The manager behind the myths

Bournemouth want to re-sign Scotland winger Matt Richie from Newcastle United but have been unable to match the 30-year-old's personal terms. (Newcastle Chronicle)

Arsenal and Brazil centre-back David Luiz, 33, could miss the first month of the season after he aggravated a neck problem. (Telegraph - subscription required)

Aston Villa want to sign Bournemouth and Norway forward Joshua King, but the 28-year-old would prefer a move to Manchester United after a deal to go to Old Trafford broke down in the January transfer window. (The Athletic - subscription required)

Arsenal and France forward Alexandre Lacazette, 29, will seek clarification over his role in the team amid rumours the Gunners are willing to sell him this summer. (ESPN)

Watford will not stand in English striker Troy Deeney's way as the 32-year-old seeks a return to Premier League football. (Mail)

Simon Grayson is to be made Wigan Athletic manager by the League One club's administrators. (Sun)

Manchester United have signed 16-year-old Alejandro Garnacho from Atletico Madrid. The striker will arrive from Spain later this week but will have to quarantine for 14 days. (Manchester Evening News) 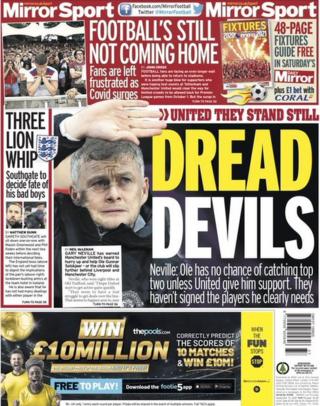