Manchester City are set to put in a fresh offer of £66m plus add-ons for Koulibaly next week. (Inside Futbol)

West Ham have made a bid worth more than £20m for Burnley's English centre-back James Tarkowski, 27. (Sky Sports)

Former Tottenham boss Mauricio Pochettino has backtracked on claims that he would never manage Barcelona because of his allegiance to rivals Espanyol. (Sun)

Manchester United are prepared to walk away from attempting to sign Borussia Dortmund and England winger Jadon Sancho as they feel the German club's valuation of the 20-year-old is too high. (Star)

Manchester United are also not willing to lower their £18m valuation of English defender Chris Smalling, 30, but there is hope that a deal with Roma can still be reached. (Corriere Dello Sport, via Star)

Scotland winger Ryan Fraser has arrived on Tyneside for talks with Newcastle United. The 26-year-old is a free agent after leaving Bournemouth. (Sky Sports)

Tottenham's offer for Barcelona's 20-year-old midfielder Lucas de Vega has been rejected by the La Liga side. Although De Vega wants to move, Barca want to make him a major part of their B team next season. (Sport - in Spanish)

Leeds are in talks with Feyenoord over striker Crysencio Summerville, with the 18-year old "allowed to leave" the Netherlands club for Elland Road. (Leeds Live)

Barcelona are confident that Dutch midfielder Georginio Wijnaldum, 29, can be lured away from Liverpool in this transfer window. (Goal)

Aston Villa have made a breakthrough in negotiations over a deal to sign Brentford striker Ollie Watkins, 24. (Football Insider)

Tottenham are set to be offered Italian playmaker Federico Bernardeschi, 26, as part of Juventus' efforts to sign French midfielder Tanguy Ndombele, 23, from the north London club. (CalcioMercato - in Italian)

Barcelona are keen to move French defender Samuel Umtiti, 26, out of the club. (Mundo Deportivo) 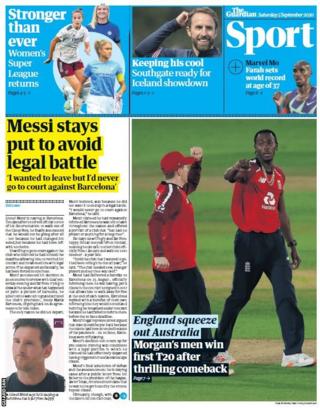