Manchester City are prepared to pay 33-year-old Barcelona and Argentina forward Lionel Messi £450m as part of a five-year plan that would eventually see him join New York City FC. (Sport - in Spanish)

Manchester United have held talks with Aston Villa as they strive to reach an agreement on a deal for 24-year-old English playmaker Jack Grealish. (Mail)

Arsenal are set to offer Argentine keeper Emiliano Martinez, 27, a new deal and could do the same for England full-back Ainsley Maitland-Niles, 23, if he stays at the club. (Mirror)

Spain's 25-year-old goalkeeper Kepa Arrizabalaga, who has been linked with leaving Chelsea, wants to stay at the Stamford Bridge club and fight for his place. (Sun)

Leeds United are interested in signing Udinese's Argentina midfielder Rodrigo de Paul but have been told any move for the 26-year-old would cost £31m. (Guardian)

Which footballer shares the same musical tastes as you?

Play the quiz to find out which player you match

Tottenham and Newcastle are interested in Bournemouth and Norway forward Joshua King, 28. (Chronicle)

Barcelona and Chile midfielder Arturo Vidal, 33, would be open to a return to former club Juventus. (Goal) 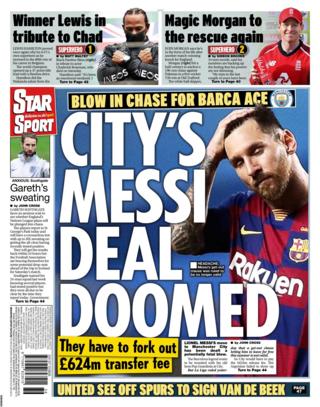