Manchester City are working out if they could bid for Barcelona and Argentina forward Lionel Messi, 33, if he becomes available. (ESPN)

Thiago says he will decide his future in the next 24 hours. (Standard)

Rangers' 23-year-old English winger Ryan Kent has told manager Steven Gerrard he wants to stay at the club despite interest from Leeds. (Sun)

Everton have reached an agreement with Napoli to pay £31.5m for their 29-year-old Brazil midfielder Allan. (Express)

The Toffees' Italy forward Moise Kean, 20, is close to sealing a return on loan to his former club Juventus. (Tuttosport, via Mirror)

Manchester United defender Victor Lindelof, 26, has been thanked by Swedish police for catching a thief who robbed an elderly woman. (Sky Sports)

Wolves are in advanced talks with Arsenal over a four-year deal for 22-year-old English full-back Ainsley Maitland-Niles. (Sky Sports)

Bournemouth have made about 10 members of staff redundant. (Bournemouth Echo)

The England football band may drop 'Rule, Britannia!' in the wake of Black Lives Matter protests. (Telegraph - subscription only) 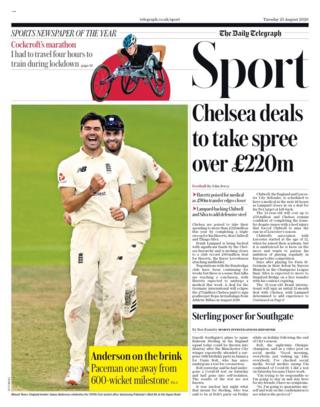