Manchester City have entered the race for Bayern Munich's Spanish midfielder Thiago Alcantara and are believed to be offering more than Liverpool for the 29-year-old. (SportBild - via Star)

Manchester United have put the rest of their transfer business on hold while they try to sign Borussia Dortmund and England winger Jadon Sancho, 20. (Mirror)

Manchester United's move for Sancho is in danger of collapsing with Dortmund bemused by their approach to negotiations, initially offering the winger a pay cut. (Mail)

Juventus have approached Arsenal over a possible transfer for French striker Alexandre Lacazette, 29. (CalcioMercato - in Italian)

Watford are ready to demand a club record fee of more than £40m for Senegal winger Ismaila Sarr, 22, amid interest from Liverpool and clubs around Europe. (Evening Standard)

Sarr has told media in his homeland that "everyone would love" to play for Liverpool. (Sans Limites - via Goal)

Why are there so few BAME sporting statues?

Valencia have alerted Premier League clubs by putting all but one of their players up for sale in a bid to balance the books. (Marca - in Spanish)

Benfica are leading the race to sign former Tottenham defender Jan Vertonghen - and the 33-year-old Belgium international could be joined at the club by Uruguay and former Paris St-Germain striker Edinson Cavani, 33. (Sun)

Arsenal are really keen to land Sporting Lisbon's 17-year-old Joelson Fernandes. The Portugal Under-17 forward has been dubbed 'the new Cristiano Ronaldo' and the Gunners could look to offer cash plus players for his signature. (Mirror)

Napoli are close to signing Brazilian Gabriel Magalhaes for £22m, and are believed to have agreed personal terms for the 22-year-old Lille defender, which could enable Manchester City to buy Senegal defender Kalidou Koulibaly, 29, from the Italian club. (Manchester Evening News)

Leicester City are one of a number of clubs linked with a move for Bournemouth's 23-year-old winger David Brooks - but new Cherries boss Jason Tindall insists there will be no "fire sale" of the club's star players. (Leicester Mercury)

Watford are expected to name Vladimir Ivic, 43, as their new head coach this week after the Serb left his post at Maccabi Tel-Aviv. (Times)

Manchester United Under-23s manager Neil Wood has strongly suggested France Under-17 midfielder Hannibal Mejbri, 17, will remain a part of the youth set-up next season rather than step up to the first team. (Manchester Evening News) 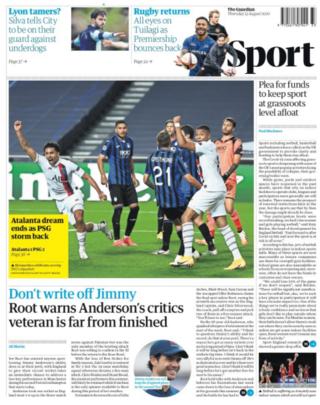