Nearly 100 years ago, Jack Leslie should have been pulling on an England shirt and making history. But the evidence suggests he was denied because of his race.

Leslie would have been the first black person to play for England when he was picked for a friendly against Ireland in 1925 - yet it's believed he was dropped when selectors visited his club, Plymouth Argyle, and discovered he was black.

A campaign has now raised more than £135,000 to celebrate Leslie's life by building a statue, which would be one of the few in the UK to stand in honour of a black sportsperson.

The country has 240 statues of sportspeople, but only 10 of those are of figures from black and ethnic minority (BAME) backgrounds, according to data from Sheffield University.

Football has the most with five, but tennis, golf and cricket - among others - don't have any sport statues from diverse backgrounds. 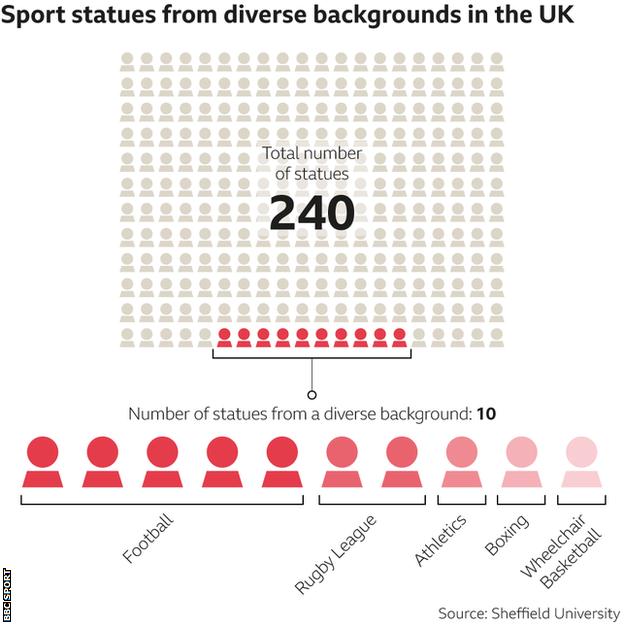 Why so few diverse statues?

A Sheffield University study, which started in 2010 and continues each year, found that in the past five to 10 years, more BAME statues have been appearing across the UK.

"When the statue subject is chosen, particularly within football, one of the main drivers for that is nostalgia," said Dr Chris Stride, of Sheffield University.

"The majority of football statues tend to be erected around 20 to 30 years after a player has retired.

"So those players who played in the 80s are retiring around 1990, and we're now getting to the point when that era starts becoming part of the nostalgia zone. That's one reason that I think you're starting to see more pop up now."

Nine of the 10 black and ethnic minority sport statues in the UK have been erected in the past decade.

One of the most prominent statues celebrating black footballers was unveiled in 2019 - featuring the trio of Laurie Cunningham, Cyrille Regis and Brendon Batson, who helped to make West Bromwich Albion one of England's top teams in the late 1970s.

"But we don't tend to celebrate players who would be considered barrier breakers," Stride added.

He believes those players before the 1970s have not been honoured because of issues around "branding".

Stride explained: "Statues of footballers tend to be driven by the club's desire to brand the club through nostalgia, aiming to excite the fans and make them think back to the days when they were a child and went to the game."

Why so few non-football statues?

"A football club will put up a statue to make fans feel more connected to the team and bring a bit of heritage into the stadium," Stride said.

"But an athletics stadium only has people coming there a few times a year, so it hasn't got that same motivation and is not trying to attract as many paying customers in the same way."

Stride also said a statue of a sportsperson would be more likely to be erected in their home town as it helps to "build the image of the town".

What about statues of female athletes?

According to the statues project, the UK has the highest number of football statues. In total, there are more than 700 around the world, in 70 different countries.

However, very few statues are of women.

Lily Parr was the first female footballer to be honoured with her own statue. The life-size sculpture of the trailblazing winger of the 1920s and 30s, who played for the Dick, Kerr's Ladies team, was unveiled in 2019 at the National Football Museum in Manchester.

In the UK, there are only four sport statues that celebrate women's success:

Dr Stride added: "A lot of statues of female footballers and also black and ethnic minority athletes around the world are partly about reparations - the idea that these athletes were treated appallingly in the past and we need to make it up some way."

A statue celebrating Great Britain's 1984 Olympic figure skating champions Jayne Torvill and Christopher Dean is planned for the Nottingham Ice Centre, having been commissioned in 2014.

What now for sport statues in the UK?

In 1978, West Bromwich Albion became the first British team to field three black footballers, when Batson arrived from Cambridge United to play alongside Cunningham and Regis.

Batson, the surviving member of the trio following the deaths of Cunningham in 1989 and Regis in 2018, believes the public need to do what they can to effect change.

"It really is about the people that celebrate the individual, whether they feel strongly enough about that person," Batson told BBC Sport.

One of the most famous statues is of Arthur Wharton, the world's first black professional footballer, who played for a number of English clubs between 1885 and 1902. According to the Arthur Wharton Foundation, he "refuted racist theories in a time of adversity and prejudice".

Shaun Campbell was instrumental in putting the statue of Wharton at St George's Park, home of the Football Association's national football centre.

He believes it is time for authorities to act to improve the representation of athletes from diverse backgrounds across the UK.

Campbell said: "The contributions of the black and ethnic minorities to this country is massive. It is huge. And what we see is a grossly disproportionate number of statues.

"Until you write the wrongs, in terms of balancing history, black lives will never truly matter, by those in power."

Campbell added: "It was my concept that Arthur should be here to be the aspiring, motivating character for every new player.

"So your Raheem Sterlings, your Marcus Rashfords, would all come through and look to him."