Aaron Ramsey is not wanted by new manager Andrea Pirlo at Juventus and the 29-year-old Wales midfielder is free to find another club. (Mirror)

Manchester United will continue their pursuit of England winger Jadon Sancho despite Borussia Dortmund's claim the 20-year-old will remain at the club next season. (Mail)

Inter Milan have identified Manchester United's 30-year-old defender Chris Smalling, on loan at Serie A side Roma this season, as a transfer target. (Gazzetta dello Sport)

Chelsea have agreed a five-year contract with Bayer Leverkusen and Germany forward Kai Havertz but have been told the 21-year-old will cost £90m. (RMC Sport, via Sun)

Arsenal are on the brink of completing the signing of former Chelsea midfielder Willian after the 32-year-old Brazilian had a medical. (Standard)

Spurs and England Under-21 right-back Kyle Walker-Peters, 23, is in advanced talks with Southampton. (Football Insider)

Chelsea are prepared to lower their asking price for unwanted France midfielder Tiemoue Bakayoko, 25. The club are hoping to strike a £20m deal with AC Milan. (Sun)

Liverpool have put a £20m valuation on midfielder Harry Wilson amid interest from Leeds, Newcastle, Crystal Palace and Southampton. (Mirror)

Aston Villa and Crystal Palace are linked with a move for Norwich's Argentine playmaker Emiliano Buendia, 23. (HITC, via Sun) 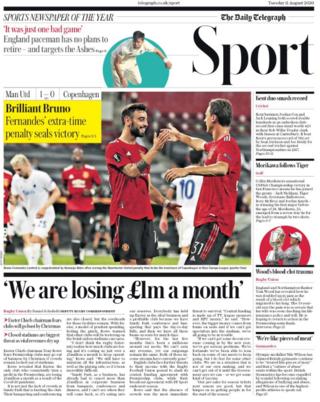