Liverpool and Manchester City are both interested in 27-year-old Sevilla and Brazil defender Diego Carlos, who has a release clause of £70m. (Star)

Arsenal and Gabon striker Pierre-Emerick Aubameyang's future at the club could be determined by whether the Gunners win the FA Cup final, with Barcelona and Inter Milan watching how the 31-year-old's situation develops. (Mirror)

Talks between Manchester United and 23-year-old English goalkeeper Dean Henderson - who spent the season on loan at Sheffield United - are at a vital stage after weeks of negotiations. (Sky Sports)

Chelsea are prioritising the signing of Leicester City's England left-back Ben Chilwell, 23, over other options in that position, including Ajax's Argentine defender Nicholas Tagliafico, 27, and Getafe's Spain Under-21 international Marc Cucurella, 22. (Goal)

How accurate were the BBC Sport pundits?

Brazil forward Hulk, 34, is considering a move to the Premier League when his contract at Shanghai SIPG expires in January. (Talksport)

However, Leeds' hopes of signing Argentina Under-20 winger Thiago Almada are fading, with the 19-year-old telling his Velez Sarsfield team-mates he wants to stay in his homeland. (Leeds Live)

Watford are in talks with Vladimir Ivic over their vacant manager's job after the 43-year-old Serb left his role as head coach at Maccabi Tel Aviv, where he won consecutive league titles. (Mail)

Barcelona are looking to offload February signing Martin Braithwaite, 29, with the Denmark forward not in manager Quique Setien's plans for next season. (Mundo Deportivo - in Spanish) 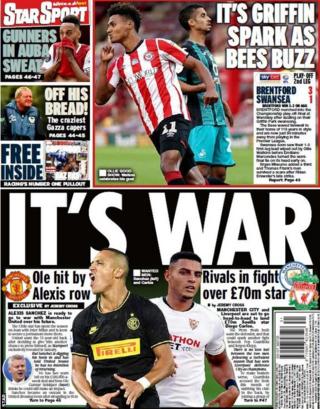