Manchester United have had an opening £89m bid for England winger Jadon Sancho, 20, turned down by Borussia Dortmund. (Bild, via Mail)

United have yet to submit a bid for Sancho and, despite Dortmund's £110m asking price being above the Premier League club's valuation, there is a belief a compromise can be reached. (Telegraph - subscription required)

Aston Villa playmaker Jack Grealish is a target for Manchester United boss Ole Gunnar Solskjaer but the 24-year-old England midfielder has been made aware he may not be able to start every week if he does make the switch to Old Trafford. (Independent)

Chelsea will consider offers of more than £50m for Spain goalkeeper Kepa Arrizabalaga, 25, and will consider a long-term loan move. Burnley and England’s Nick Pope, 28, and Ajax and Cameroon keeper Andre Onana, 24, are potential replacements. (Mail)

Chelsea, having secured a place in the Champions League next season, have opened talks with Bayer Leverkusen over a fee for 21-year-old Germany winger Kai Havertz. (Guardian)

Crystal Palace are set to listen to offers for forward Wilfried Zaha, 27 this summer with Everton expected to bid for the Ivory Coast international. (Mirror)

Garth Crooks' team of the season

Who made the cut? And which defender is in the Maldini class?

Brazil winger Willian, 31, could agree a new deal at Chelsea by the end of the week following a breakthrough in negotiations between the two parties. (Sky Sports)

Barcelona playmaker Philippe Coutinho has asked Arsenal for more time to make a decision about his future, with Leicester City and Tottenham also interested in the 28-year-old Brazil attacking midfielder. (Sport - in Spanish)

Tottenham are edging closer to a deal to sign Denmark midfielder Pierre-Emile Hojbjerg, 24, from Southampton. Spurs have offered £15m, although the Saints value the player at £25m. (Sky Sports)

Bournemouth manager Eddie Howe will hold talks with the club's hierarchy in the next 48 hours, with a decision over his future expected by the end of the week. (Mail)

Manchester City are set to sign Wales Under-21 defender Cameron Coxe on a free transfer after the 21-year-old was released by Cardiff City. (Wales Online) 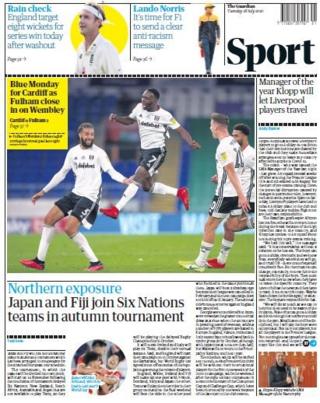