Borussia Dortmund's England winger Jadon Sancho, 20, may have to instigate a move to Manchester United by making it clear he wants to leave the German club. (Mirror)

Juventus are encouraging rival bids from Manchester City and Paris St-Germain for Brazil forward Douglas Costa, 29, and want to replace him with Wolves and Mexico striker Raul Jimenez, 29. (Tuttosport)

Manager Jose Mourinho said Tottenham Hotspur striker and England captain Harry Kane, 26, would "not be so special playing for another team" when asked about the player's future. (Sky Sports)

Arsenal's Spanish midfielder Dani Ceballos, 23, is ready to ask Real Madrid president Florentino Perez to extend his loan deal with the Gunners for another season. (El Confidencial, via Express)

'De Gea not the best keeper in Manchester, never mind the world'

Former Barcelona and Netherlands striker Patrick Kluivert and France 1998 World Cup winner Laurent Blanc, who has managed Bordeaux, France and PSG, have emerged as the frontrunners to take over the reins at the Nou Camp if coach Quique Setien is sacked. (AS)

West Ham's 16-year-old midfielder Benicio Baker-Boaitey is set to join Bayern Munich and will travel to Germany for talks, having rejected the chance to sign professional terms at the Hammers when he turns 17 in January. (Sun)

Chelsea's 31-year-old Brazilian midfielder Willian, who has been linked with Tottenham, Arsenal and Manchester United, has revealed he is playing a waiting game over a new contract at Stamford Bridge, having requested a three-year deal and been offered two. (De Sola, via Mirror)

Hibernian will get a cut of the transfer fee should the Magpies move to sign Aston Villa's Scotland midfielder John McGinn, 25. (Birmingham Mail)

Arteta believes convincing players to join the Gunners will not be difficult, even if their impressive FA Cup semi-final win against Manchester City does not lead to European qualification. (Guardian) 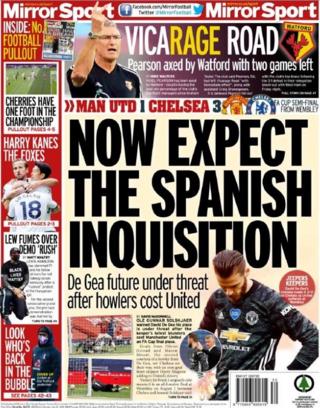