Guardiola will be given about £150m to bolster his City squad. (Guardian)

Napoli's Senegalese defender Kalidou Koulibaly, 29, could form the centrepiece of Guardiola's plans to reconstruct his defence. (Telegraph - subscription only)

Barcelona president Josep Maria Bartomeu has rejected the possibility of Paris St-Germain's Brazilian forward Neymar, 28, returning to the Nou Camp but says the club are considering a move for Inter Milan and Argentina striker Lautaro Martinez, 22. (TV3 via Mundo Deportivo - in Spanish)

Bartomeu also says he is "sure" Argentine forward Lionel Messi, 33, will remain at the Nou Camp beyond next year. (TV3 via Evening Standard)

Real Madrid are confident France striker Kylian Mbappe, 21, will be negotiating a transfer to them from Paris St-Germain in a year's time. (Marca)

Liverpool are looking to sell Croatia defender Dejan Lovren, 31, despite seeking to extend his contract. (Goal)

Nice have made an offer for 24-year-old Spanish midfielder Rony Lopes of Sevilla. (RMC Sport - in French)

Bournemouth's Dutch defender Nathan Ake, 25, might not play again this season after hobbling off with a groin problem against Leicester. (Bournemouth Echo) 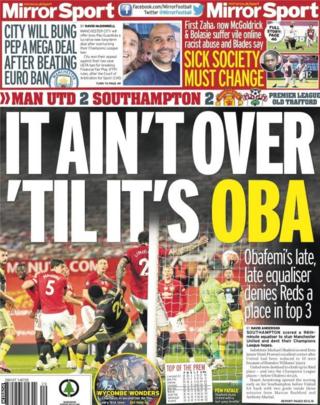 Anything is possible for England - Root

Read more on Anything is possible for England - Root

Johnson leads going into final round

Read more on Johnson leads going into final round