Borussia Dortmund will accept nothing less than 130m euros (£116m) for England winger Jadon Sancho, 20, who is a reported target for Manchester United. (Westdeutsche Allgemeine Zeitung, via Manchester Evening News)

Senegal centre-back Kalidou Koulibaly, 29, says he could finish his career with Napoli, despite being linked with Liverpool, Manchester City, Manchester United and Real Madrid. (La Gazzetta dello Sport - in Italian)

Barcelona have given up on trying to bring Paris St-Germain and Brazil foward Neymar, 28, back to the Nou Camp this summer. (Marca)

Manchester City have not ruled out handing striker Sergio Aguero a new one-year contract to keep the 32-year-old Argentine at Etihad Stadium until 2022. (Sunday Mirror)

Wolves manager Nuno Espirito Santo is close to agreeing a new deal to stay at the club. (Sunday Mirror)

Chelsea are set to ask Manchester United to name their price for 23-year-old English goalkeeper Dean Henderson with doubts over the future of Kepa Arrizabalaga. (Sunday Express)

Tottenham will reject all offers for English wing-back Ryan Sessegnon this summer despite interest from Barcelona in the 20-year-old. (Daily Star Sunday)

Arsenal manager Mikel Arteta says Scottish defender Kieran Tierney, 23, will not be leaving the club this summer, despite interest from Leicester. (Standard)

AC Milan and Chelsea are also interested in Jovic. (Mundo Deportivo - in Spanish)

Juventus and Manchester City have joined Liverpool in pursuit of Bayern Munich and Spain midfielder Thiago Alcantara, 29. (Tuttomercatoweb - in Italian)

Chelsea and Inter Milan have started discussions with Lille over a possible move for France forward Jonathan Ikone, 22. (Le 10 Sport - in French)

Real Madrid boss Zinedine Zidane says he is unsure if Colombia attacking midfielder James Rodriguez, 28, will ever play for the club again. (AS)

Juventus and Inter Milan both want to sign Roma and Italy attacking midfielder Nicolo Zaniolo, 21, this summer. (Tuttosport - in Italian)

Barcelona will have to pay Ousmane Dembele's former club Borussia Dortmund 20m euros (£17.9m) if they sell the France forward, 23, this summer. (Bild - in German)

Flamengo's 23-year-old Brazilian midfielder Gerson, who has been linked with Chelsea and Tottenham, says he has no interest in leaving the club. (Globo Esporte - in Portuguese) 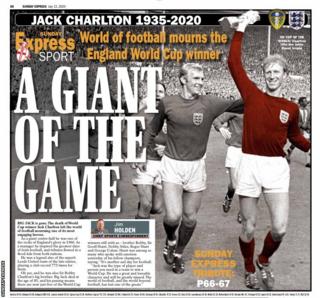 Sibley & Root lead England in chase of 277 to beat Pakistan