Norwich City want around £50m for defender Ben Godfrey, 22, with Bundesliga clubs Borussia Dortmund and RB Leipzig among those keen on the England Under-21 international. (Sky Sports)

Midfielder Kai Havertz, 21, is ready to hand in a transfer request at Bayer Leverkusen after telling Chelsea he wants to join them this summer. (Star)

Kevin de Bruyne's agent has rubbished talk that the 29-year-old Belgium midfielder is set for a move away from Manchester City to join Real Madrid or Paris St-Germain. (Sporza, via Star)

Everton manager Carlo Ancelotti says he has been given an "assurance from the board" that the club will "improve" his squad this summer. (Guardian)

The agent of Aston Villa's English midfielder Jack Grealish says the 24-year-old has not reached an agreement to sign for Manchester United, with his club valuing him at about £80m. (StrettyNews)

Arsenal midfielder Mesut Ozil, 31, wants to move to Turkey or the United States, but the German will only leave the Gunners after seeing out the final year of his contract. (Sun)

Arsenal have made an approach to sign French defender Malang Sarr after he left Nice - but face competition from RB Leipzig for the 21-year-old. (Marca, via Express)

Tottenham are interested in signing French centre-back Kurt Zouma from Chelsea, although the 25-year-old is also a target for Everton. (Express)

A former team-mate of Brentford and Algeria international Said Benrahma, 24, has congratulated the winger on his move to Chelsea on Instagram - hinting a deal has been agreed for the player, who is valued at more than £30m. (Sun)

Manchester City are confident that Spanish defender Eric Garcia, 19, will stay with them amid talk he is interesting former club Barcelona. (Manchester Evening News)

Juventus have offered Chelsea the pick of two players, including Wales midfielder Aaron Ramsey, 29, in exchange for Italy midfielder Jorginho, 28. (Express via Tuttosport)

Sevilla are planning a move to sign Arsenal and Spain defender Hector Bellerin, 25, this summer. Both Juventus and Inter Milan are also interested in the player. (Express)

The father of Newcastle United and Paraguay forward Miguel Almiron, 26, has played down speculation linking his son with a move to Atletico Madrid. (Newcastle Chronicle) 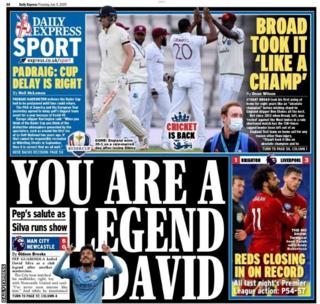