Chelsea's hopes of signing Germany midfielder Kai Havertz from Bayer Leverkusen have been boosted by Bayern Munich chief Karl-Heinz Rummenigge saying his club cannot afford a deal for the 21-year-old this summer. (Sun on Sunday)

Real Madrid want to sell Colombia playmaker James Rodriguez, who has one year left on his contract, rather than lose him for free next year. Arsenal, Everton, Manchester United and Wolves are thought to be interested in the 28-year-old. (Marca)

How much do you know about the centurions?

Leicester City will try to sign Denmark defender Jannik Vestergaard from Southampton, having missed out on the 27-year-old in January. (Goal)

Everton and Colombia centre-back Yerry Mina, 25, is wanted by Valencia. (Sun on Sunday)

Hojbjerg is also a target for Tottenham, who want to sign 20-year-old English right-back Max Aarons from Norwich City as well. (Athletic, via Sunday Express)

Ancelotti also says there is "no way" Everton left-back Lucas Digne will be allowed to leave the club this summer, after the 26-year-old Frenchman was linked with Chelsea and Manchester City. (Sunday Telegraph)

Crystal Palace are preparing a £10m bid for Chelsea's English midfielder Conor Gallagher. The 20-year-old has impressed on loan at Charlton and Swansea this season. (Sun on Sunday)

Norwich's English centre-back Ben Godfrey, 22, is a target for both Borussia Dortmund and RB Leipzig. (Sun on Sunday)

Leeds will move for Celtic's French striker Odsonne Edouard, 22, if they win promotion to the Premier League. (Sunday Mirror)

Sunderland manager Phil Parkinson says the future of 34-year-old Republic of Ireland midfielder Aiden McGeady, who is on loan at Charlton, will be decided at the end of the Championship season. (Sunderland Echo) 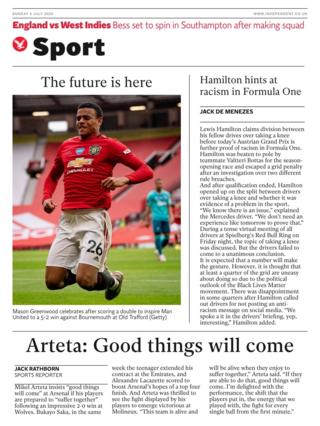 The back page of the Independent on Sunday