Everton, Liverpool, Manchester City and Manchester United are due to watch Leon Bailey, 22, on Saturday, with the Bayer Leverkusen and Jamaica winger keen on a move to England. (Sky Sports)

Sevilla are lining up a loan move for Chelsea and Spain goalkeeper Kepa Arrizabalaga, 25, whose future is uncertain at Stamford Bridge. (Sun)

Racism case a fight for 'justice and equality', say ex-players

Manchester United goalkeeper Dean Henderson, on loan at Sheffield United, has warned the Old Trafford club he will not wait around forever to become their first choice, amid interest in the 21-year-old Englishman from Chelsea. (Express)

Chelsea are keen on Lille's 24-year-old French goalkeeper Mike Maignan and his compatriot Alphonse Areola, 27, who is on loan at Real Madrid from Paris St-Germain. (Express)

However, Tottenham are also weighing up a summer move for Maignan, with boss Jose Mourinho considering the player as a successor to his current France goalkeeper Hugo Lloris, 33. (Sun)

West Ham manager David Moyes has revived his interest in Chelsea and England midfielder Ross Barkley, 26. The Blues rejected the Hammers' approach for a loan deal in January. (Mirror)

English midfielder Angel Gomes, 19, is targeting a move abroad but does not have an immediate deal lined up following his release by Manchester United. (Manchester Evening News)

Sheffield United have made a £3.5m bid for Reading midfielder John Swift, 25, but Leeds are also interested in the former England Under-21 international. (Mail)

Eintracht Frankfurt's Filip Kostic, 27 could leave the Bundesliga side, with Inter Milan and Premier League clubs interested in the Serbia winger. (Goal) 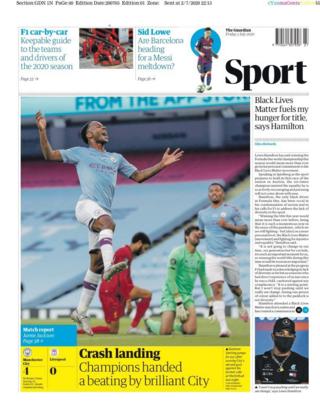