Chelsea are willing to sign United's 19-year-old England Under-20 midfielder Angel Gomes, who has also had multiple offers from abroad. (Independent)

Arsenal will not attempt to buy Spain midfielder Dani Ceballos, 23, when his loan deal from Real Madrid ends. (Sun)

Real Madrid's 21-year-old Morocco right-back Achraf Hakimi - who has been on loan at Borussia Dortmund - has rejected an offer from Manchester United. (AS, via Manchester Evening News)

'I just need someone to believe in me'

Goalkeeper Joe Hart, released by Burnley, talks about what the future may hold...

Former Republic of Ireland and Manchester United midfielder Roy Keane is in talks to become manager of the Azerbaijan national team. (Sun)

Southampton are interested in Arsenal striker Folarin Balogun. The 18-year-old has played for England and the United States at youth level but also qualifies to represent Nigeria. (Mail)

Paris St-Germain's 27-year-old France defender Layvin Kurzawa, who has been linked with Arsenal and Liverpool, has signed a new four-year deal with the Ligue 1 champions.(Goal)

But the Reds have been told they must pay more than £35m if they want to sign Brighton's 22-year-old English defender Ben White, who has impressed during a loan spell in the Championship with Leeds United this season. (Football Insider)

A number of Barcelona players have a strained relationship with manager Quique Setien following their recent run of poor form. (ESPN)

Leicester City's 18-year-old full-back Dennis Gyamfi will leave the club when his contract expires on 30 June. The Netherlands youth international has turned down several contract offers from the Foxes. (Leicester Mercury) 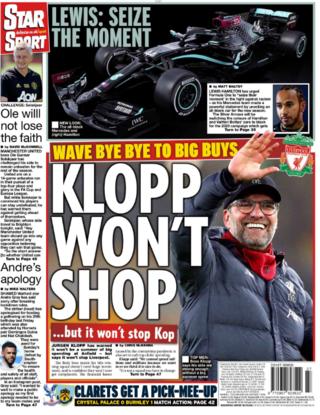 Vardy scrambles in opener for Leicester at Bournemouth

Read more on Vardy scrambles in opener for Leicester at Bournemouth

Watch: Today at the Test

Read more on Watch: Today at the Test