When the BBC Sport website was launched on Monday, 3 July 2000, it was the morning after France had beaten Italy with a golden goal to win Euro 2000.

The internet was a different place. Most homes still had slow dial-up access - if they could get online at all. Mobile phones were for calls and texting only. And the first major social network - Friends Reunited - was just days old.

In the two decades since, we've gone from watching sport on clunky big televisions to live 4K action on our phones, and from waiting on Ceefax for football scores, to having goal news sent straight to our watches.

To mark the 20th anniversary of its website, BBC Sport looks back at the evolution of the site and how the changing needs of sports fans has helped shape its history.

The BBC News website, which launched in 1997, had covered sport - with a small team of journalists providing a limited number of stories and match reports, along with pop-up coverage of the France '98 World Cup.

But this was to be the start of something different - a dedicated sports service within the BBC's growing online site.

Ben Gallop, now head of radio and digital for BBC Sport, was part of the team that launched the website.

He said the atmosphere, as the team raced to meet the 3 July launch deadline, was fevered.

"When we first launched, we were in what was essentially a pre-fabricated office that was an adjunct to Television Centre in London," he explained.

"We'd been given this space, it was cut off from everybody else, we could do our own thing, and this definitely created a sense of a real start-up mentality.

"It's such a cliche, but the kind of all-nighters people would do back in the day for those digital launches, it was part of the culture of that era.

"It was the dot com boom and everyone fancied a bit of the action."

The early days of the website would prove a challenge for staff, with the initial approach newspaper-like in both volume and timing. In the days before live text coverage and streaming video, events would be reported on after they had been completed, leaving journalists waiting to file their stories.

Anna Thompson, now women's sports lead at BBC Sport, joined before the launch - but admits some shifts could be less than hectic in the beginning before things really took off.

"I wanted to join the sport website as I was a big sports fan and had been a sports editor of a daily regional newspaper before joining the BBC, so it was right up my street.

"The website was staffed 24 hours a day back then and I remember night shifts in the early days when there was little sport or sports news going on.

"My first major event came at the 2002 Winter Olympics, which was tremendously exciting. Who could forget Rhona Martin's millimetre perfect last stone to win curling gold? It was a privilege to be there."

The World (of Sport) as it was

The first summer of the new millennium would prove to be a busy one for sports fans.

What was number one the week BBC Sport launched? 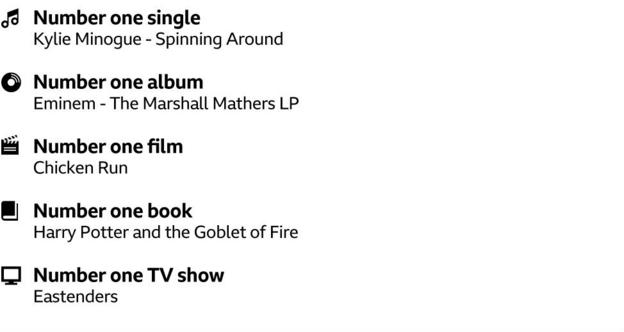 The first big test for the BBC Sport website was the 2000 Olympic Games, held in Sydney.

The site, based on the design for BBC News, was just 620 pixels wide - ideal for smaller screens back then, but less than half the current width of the website.

As the UK's Olympic broadcaster, covering the Games every four years would be a major operation for BBC Sport online - and the catalyst for improving the look and feel of the site for audiences increasingly coming online for the latest news.

Before the 2004 Games in Athens, the News and Sport sites were refreshed to make use of bigger screens, stretching another 300 pixels wide to allow more stories to be showcased.

More video and live text coverage was introduced over the following years, allowing visitors to the site to enjoy action in real time.

But the biggest change to the site since its launch would come in 2012, with the eyes of the world on the UK - and the BBC - for the London 2012 Olympics.

Coming just months after the sport team moved to the BBC's new base in Salford, the website was redesigned to showcase the action from London, with every event being streamed online.

"The redesign was the first major upgrade to the site for nine years," said Neil Hall, BBC Sport's head of product.

"Alongside its new look, it was a complete overhaul of the underlying technology."

The timing of both the Olympics and the redesign would prove to be key in the website's development.

"It really did feel like a moment in time when all this technology and capability was coming together, just when we were going to have the biggest sporting event of our lifetime," said Gallop.

"But because London got the Olympics in 2012, we were able to use streamed media, mobile and social media in a way we never had before."

In the wake of the Olympics, as internet usage continued to evolve, so too did the site - with design changes to take account of the growth of mobile devices, and the launch of a smartphone app in 2013 that now brings more than three million visitors to the site a week.

About that change to yellow…

The 2012 redesign was a controversial moment for some users of the site - who felt the corporation had gone too far in incorporating the yellow colour scheme used by BBC Sport.

Some invoked Coldplay's song Yellow, said the site looked like "an explosion in a web design shop", and claimed the yellow was "far too bright and uncomfortable on the eyes".

Gallop insists he has no regrets about the switch to yellow - but admits the BBC has learned much from responses to the change.

"That's a great way of attracting attention - but it's perhaps more suited to the sorts of relaunches you see in the 'old media' world.

"If you want to take your [digital] audience with you, we've learned it's much better to go for an iterative approach.

"You might not generate quite as many headlines that way, but equally you're less likely to turn people off."

One of the key successes of the website has been the journalism.

Over two decades the site has also been at the forefront of breaking and covering the biggest sport stories - from the Fifa corruption scandal to Dan Roan's interview with Lance Armstrong, and agenda-setting investigations such as Price of Football, and prize money inequality in sport.

However, coverage of Para-athletes, women's sport and the UK's lesser-known success stories have always sat along the big headlines.

Industry expert Stephen Lepitak, executive editor of The Drum magazine, believes public service commitment and depth of coverage has been a key part of the site's success.

"For me, it's the only place where I think the grassroots still gets covered," he said.

"A lot of sports would not get much coverage without BBC Sport online at all. The idea of not having that would be devastating for the sports industry.

In 2012, more than 11.5 million people in the UK used the BBC Sport website each week. By 2020, that number had grown to 21.3 million, with millions more visiting from overseas and following BBC Sport's social media accounts.

But what comes next?

As the website enters a third decade, the world again looks a different place. Months of sporting events were postponed as the impact of Covid-19 hit the world, with the cultural and social impact likely to be felt for years to come.

With increased competition from new websites, and the cost of sports rights increasing, the BBC faces more challenges than before to provide audiences with the coverage it wants.

However, Lepitak feels those costs will also enable the BBC to play an increasingly important role for the wider audience.

"We're getting to a point where subscriptions are being introduced right, left and centre because media companies need revenue, and a lot of people can't afford that.

"So BBC Sport is there as a service to the public who possibly can't afford those to still have access to sport."

And for Gallop? After 20 years of watching how sports coverage has evolved, he believes the site has a key role in bringing audiences together.

"We can see how sports media is evolving," said Gallop.

"We know there is more interest in the stories around the sport itself and the fun and entertainment that come with it, so I can only see that side of our output growing - to complement the news and live coverage that will always be the mainstay of our website.

"Increasingly the audience will play a more active role. Sport in lockdown has provided a challenge - with crowds shut out of the grounds, there is even more need for fans to come together virtually.

"I'm fascinated by the role we can play here."

You can read more about the launch of the BBC Sport website at History of the BBC.