Borussia Dortmund are growing increasingly confident that 20-year-old England winger Jadon Sancho will remain at the club, having yet to receive an offer for the player. (Sport Buzzer - in German)

Jurgen Klopp has admitted he thinks Sancho would look "very good" in a Liverpool shirt but the Reds manager does not think a transfer will happen this summer. (Bild, via Liverpool Echo)

However, United must sell at least four players - including Chile forward Alexis Sanchez, 31, and England midfielder Jesse Lingard, 27 - to fund a move for Sancho. (Sunday Mirror)

Chelsea are also keen on signing Ajax's Cameroon goalkeeper Andre Onana, 24, as a replacement for Kepa Arrizabalaga. Spain international Arrizabalaga, 25, has been linked with a move to Valencia this summer on a two-year loan deal. (Marca, via Sunday Express)

Tottenham Hotspur have no intention of selling record signing Tanguy Ndombele, 23, this summer. The French midfielder is yet to feature since the Premier League restart and has been linked with Barcelona. (Football London)

Bayer Leverkusen boss Peter Bosz accepts a deal for Kai Havertz to leave the club could be completed by August, with Chelsea, Real Madrid and Manchester United among those competing for the 21-year-old Germany midfielder. (Sun on Sunday)

Aston Villa's 24-year-old English midfielder Jack Grealish, a target for Manchester United, has told friends he has found a house in the north-west of England. (Sunday Express)

Arsenal are interested in Red Bull Salzburg's Hungarian midfielder Dominik Szoboszlai. The 19-year-old was first linked with the Gunners during the summer of 2019. (Sun)

RB Leipzig boss Julian Nagelsmann would like to take a job abroad when his deal with the Bundesliga side expires in 2023 - and the 32-year-old German is keen on a move to the Premier League. (Bild - in German)

Former Brazil forward Ronaldinho, 40, wants to come out of retirement to play for Gimnasia, who are managed by Argentina legend Diego Maradona, once he has finished his house arrest in Paraguay. (Marca - in Spanish)

Juventus director Fabio Paratici has played down talk of a move to the Premier League for midfielder Adrien Rabiot, with Manchester United, Arsenal and Everton all interested in the 25-year-old Frenchman. (Sky Sports Italia, via Metro)

The midfielder swap deal involving Barcelona's Brazilian Arthur, 23, and Juventus' Bosnian Miralem Pjanic, 30, is moving closer, with both players expected to have medicals on Sunday. (Calciomercato)

Real Valladolid want to extend Sandro Ramirez's loan until the end of the La Liga season but have yet to reach an agreement with Everton for the 24-year-old Spanish striker. (Liverpool Echo)

Tottenham will listen to offers for 21-year-old English striker Kazaiah Sterling this summer after a series of loans failed to ignite his career. (Football Insider)

Atalanta's Belgian right-back Timothy Castagne, 24, says he would not be able to turn down the chance of a move to Spurs. (Teamtalk)

Burnley are the subject of interest from an American and Middle East consortium looking to buy a Premier League club. (Sunday Telegraph) 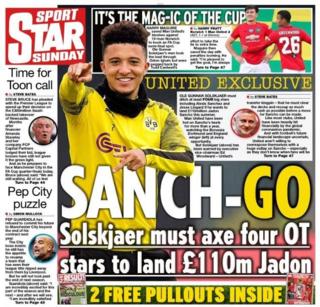