Manchester United goalkeeper Dean Henderson, who is currently on loan at Sheffield United, will only sign a new contract at Old Trafford if he is guaranteed to be first choice. Chelsea and Tottenham are interested in the 23-year-old Englishman. (Manchester Evening News)

Barcelona have dropped their asking price for midfielder Philippe Coutinho from more than £100m to £63m, although his former club Liverpool are not interested in re-signing the 28-year-old Brazilian. (Mirror)

Arsenal midfielder Matteo Guendouzi, 21, taunted Brighton forward Neal Maupay, 23, over their respective salaries during their game on Saturday, with both French players involved in an altercation at the end of the match. (Mail)

Belgium right-back Thomas Meunier will join Borussia Dortmund from Paris St-Germain on a free transfer when his contract ends this month. The 28-year-old has signed a four-year deal with the German club. (Bild - in German)

Paris St-Germain and Uruguay striker Edinson Cavani, 33, will also not sign a short-term contract extension to play in the Champions League and will leave the Ligue 1 side this month. (RMC Sport - in French)

Who made your all-time Euros XI?

The Premier League could keep the summer transfer window open beyond 5 October and defy Uefa's wishes with clubs set to vote on plans. (Mail)

Watford and Crystal Palace are both trying to sign Scotland winger Ryan Fraser, 26, on a free transfer when his contract at Bournemouth expires on 30 June. (Express)

FA Cup replays could be scrapped in all rounds of the 2020-21 competition in a way to ease pressure on the football schedule. (Sun)

Agent Mino Raiola is in talks with Arsenal and Roma over a deal that would see Armenia midfielder Henrikh Mkhitaryan, 31, and Netherlands winger Justin Kluivert, 21, swap clubs. Mkhitaryan is on loan to the Italian side from the Gunners. (Calciomercato - in Italian)

Aston Villa boss Dean Smith wants Premier League referees to do more to protect his midfielder Jack Grealish, with the 24-year-old Englishman being the most fouled player in the top-flight. (Star)

Croatia midfielder Mario Pasalic, 25, has joined Serie A side Atalanta on a permanent deal after six years at Chelsea without making an appearance for the Blues. (Sky Sports)

Leicester boss Brendan Rodgers has warned big clubs that the Foxes will fight to keep hold of Chilwell. (Mail)

Coventry City will be able to offer a permanent deal to Aston Villa midfielder Callum O'Hare this week. The 22-year-old Englishman has spent the season on loan with the League One champions. (Coventry Telegraph)

Ligue 1 club Rennes are confident Eduardo Camavinga, 17, will stay for next season despite the France Under-21 midfielder being heavily linked with Real Madrid in recent weeks. (Marca) 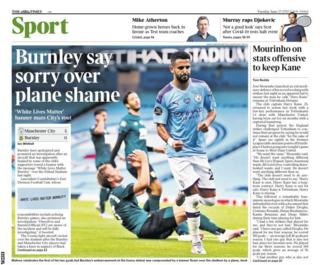 The back page of Tuesday's Times