England left-back Ben Chilwell, 23, is tempted by a move to Chelsea later this summer but has not yet asked to quit Leicester City. (Mirror)

Tottenham Hotspur are waiting for Belgium defender Jan Vertonghen, 33, to decide whether he will see out the rest of the season or leave the club before it is complete. (Sky Sports)

Newcastle United midfielder Matty Longstaff has not trained this week amid uncertainty over his future at the club, with Serie A side Udinese offering wages of £30,000 a- eek for the 20-year-old Englishman, who is out of contract this summer. (Mail)

'A goal beyond belief'

When Scotland were sunk by Gazza's genius...

Manchester United are preparing to offer 19-year-old English full-back Brandon Williams a new contract, with an improvement on his current £4,000-per-week salary after impressing this season. (The Athletic - subscription required)

Liverpool could wrap up the Premier League title at 21:00 BST on a Sunday night at Everton as their first two games back are both being moved to evening kick-offs. (Mail)

Arsenal may be willing to sell Scotland defender Kieran Tierney, 23, to Leicester City, just 12 months after he moved to Emirates Stadium. (Express)

Barcelona and France forward Antoine Griezmann, 29, says he intend to finish his career in Major League Soccer in the US. (LA Times)

Barca's Croatia midfielder Ivan Rakitic, 32, will discuss a potential return to former club Sevilla at the end of the season. (Mundo Deportivo - in Spanish)

Juventus midfielder Adrien Rabiot, 25, is a target for Everton and Arsenal, but the Frenchman will not accept a wage cut to leave the Serie A side. (Tuttomercato - in Italian)

Germany midfielder Kai Havertz is a target for Real Madrid, but Bayer Leverkusen sporting director Simon Rolfes says the Bundesliga club are yet to make a decision on the 20-year-old's future. (Marca)

Sporting's Portuguese goalkeeper Diogo Pinto is expected to sign a contract with Manchester City when he turns 16 later this month. (Record - in Portuguese) 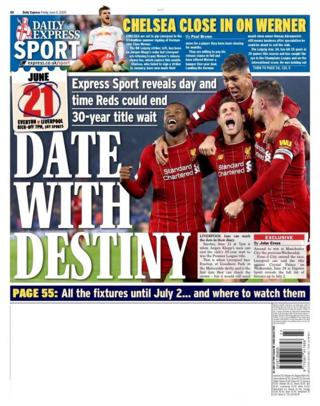