Chelsea have made Leicester full-back Ben Chilwell, 23, one of their main transfer targets but the England international could cost up to £85m. (Athletic - subscription required)

Arsenal will keep captain and Gabon striker Pierre-Emerick Aubameyang, 30, until the end of his contract in 2021 if they do not receive a bid of more than £20m for him this summer. (Sun)

Tottenham have been offered the chance to sign £18m-rated Inter Milan and Uruguay midfielder Matias Vecino. The 28-year-old is also of interest to Arsenal and Everton. (Star)

The pre-season in Sweden that goes on and on...

Newcastle midfielder Matty Longstaff, 20, who is currently on an £850-a-week academy deal, has been offered a £30,000-a-week contract by Serie A side Udinese, with the Magpies due just £400,000 in compensation. (Sky Sports)

Barcelona have made an enquiry about re-signing Spanish centre-back Eric Garcia, 19, from Manchester City. (ESPN)

Galatasaray have joined the race to sign Charlton and Montserrat international striker Lyle Taylor, 30, who says he will not play for the club again as his contract expires this summer. (Mail)

Wales winger Harry Wilson, 23, will seek talks with Liverpool boss Jurgen Klopp about his future when he returns to the club from his loan deal at Bournemouth at the end of the season. Wilson is a target for Leeds. (Liverpool Echo)

Brighton look set to miss out on the £15m signing of Rennes striker M'Baye Niang, 25, after Marseille entered talks to sign the Frenchman. (Star)

Aston Villa's English striker Keinan Davis, 22, has been linked with a move to Besiktas. (Sporx - in Turkish)

The Premier League has told clubs that no more than four matches will be stages at neutral venues, meaning Liverpool could become champions at Anfield. (Mail) 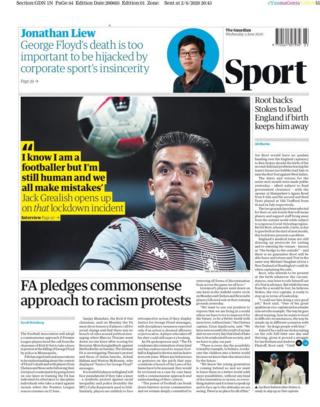 Read more on 'Gauff can change world for the better'