Newcastle have begun talks to sign Barcelona midfielder Philippe Coutinho, 28, after Bayern Munich decided they will not be taking up their option to sign the Brazil international on a permanent deal. (Mundo Deportivo - in Spanish)

The Magpies have also identified Liverpool midfielder Xherdan Shaqiri, 28, as a major transfer target this summer. The Switzerland international has played just 10 times for the Reds this season. (Mail)

The £300m Saudi Arabia-funded takeover of Newcastle is in doubt after the World Trade Organisation ruled that the country is behind a pirate TV and streaming service that offers illegal access to sporting events. (Guardian)

Arsenal and Tottenham are both competing over the free signing of Chelsea and Brazil midfielder Willian, 31, who is out of contract at Stamford Bridge this summer. (Telegraph)

Euros Game of the Century

Head here to vote for the greatest Euros match since 2000

Manchester City are leading the race to sign Ajax teenager Sontje Hansen, 18, who won the Golden Boot award at the Under-17 World Cup last summer. (Goal)

Portuguese side Vitoria Guimaraes are looking to sign Crystal Palace teenager Jadan Raymond, 16, for £250,000 with the midfielder's contract expiring next month. (Sky Sports)

Former Arsenal midfielder Jack Wilshere has lamented the star departures at the Emirates in the early 2010s, saying the Gunners would have won the Premier League had the team not been broken up. (Goal)

The Premier League is looking at ways of taking fans to grounds digitally when the season resumes behind closed doors, including the potential use of the LED advertising boards and screens. (Express)

Premier League games that kick off at 3pm on a Saturday may be shown live on TV after the organisation dropped its objections to showing matches at that time. (Times - subscription required) 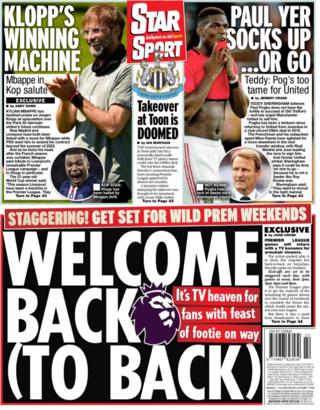 Read more on Guardiola at a loss to explain defeats