Paul Pogba's agent Mino Raiola has begun talks with Juventus about a summer move, but Real Madrid and Paris St-Germain are also both interested in the 27-year-old Manchester United midfielder. (Le10sport - in French)

Barcelona are open to selling all but six of their players this summer as the club's financial situation worsens because of coronavirus. (Marca)

And France centre-back Samuel Umtiti, 26, will not be leaving, despite reports he could be used in a deal to sign Inter Milan striker Lautaro Martinez, 22, or Juventus midfielder Miralem Pjanic, 30. (Marca)

Sergio Aguero's agent has denied suggestions the 31-year-old Manchester City striker could leave the Etihad this summer, with rumours linking him with a return to Argentina. (Sunday Mirror)

Chelsea midfielder Willian, 31, says the club's refusal to offer him a three-year contract extension has left him in a "difficult" situation. (Esporte Interativo, via Metro)

Southampton will be forced to sell stars like Danny Ings, 27, Nathan Redmond, 26, and James Ward-Prowse, 25, this summer if the club cannot find a buyer for owner's 80% stake. (Star Sunday)

Manchester United are now favourites to sign Napoli centre-back Kalidou Koulibaly, 28, after PSG, Barcelona and Real Madrid pulled out of the race. (Sun on Sunday)

Belgium centre-back Jan Vertonghen, 33, looks set to leave Tottenham this summer, with the club not willing to match his request for a two-year extension to his £70,000-a-week contract. (ESPN)

Midfielder Ainsley Maitland-Niles, 22, is expected to leave the Gunners when the summer transfer window opens after falling out of contention under new boss Mikel Arteta. (Star Sunday)

Real Madrid are considering a surprise summer move for Celtic's Norwegian defender Kristoffer Ajer, 22, after his impressive showings in the Scottish Premiership. (Mundo Deportivo - in Spanish) 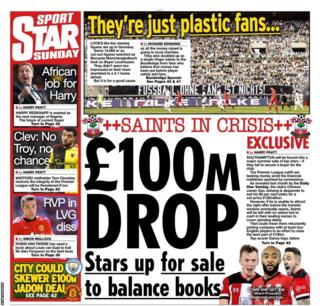