Barcelona have lowered their valuation of 26-year-old French defender Samuel Umtiti to just £27m, amid interest from Manchester United and Arsenal. (Sport - in Spanish)

Juventus and Bosnia-Herzegovina midfielder Miralem Pjanic, 30, will turn down a move to the Premier League this summer, with Chelsea among the clubs interested. (Mundo Deportivo - in Spanish)

Meanwhile, the Gunners have joined Everton in targeting Juventus' French midfielder Adrien Rabiot, 25, and hope he can form a partnership with compatriot Matteo Guendouzi, 21. (Le10 Sport - in French)

Arsenal are also chasing Ajax and Argentina left-back Nicolas Tagliafico, 27, in a deal worth £20m. (Sun)

Tottenham Hotspur's 29-year-old defender Danny Rose, who is on loan at Newcastle United, has revealed he wants to play for Leicester City manager Brendan Rodgers - but joked that Foxes left-back and England team-mate Ben Chilwell, 22, would "have to be bought first". (Mail)

Everton lead the race to sign Barcelona defender Jean-Clair Todibo. The French 20-year-old has spent this season on loan at Schalke. (Sport - in Spanish)

Wolves are interested in Real Madrid midfielder Oscar Rodriguez, who is currently on loan at Leganes. The 21-year-old is also a target for Lazio. (Mundo Deportivo - in Spanish)

Dortmund and Germany midfielder Emre Can, 26, says he would never sign for Manchester United because his "heart would not allow it" after playing for Liverpool. (Bild, via Mirror)

Crystal Palace are ready to make a move for Bournemouth winger Ryan Fraser. The player favours a move to Tottenham, but manager Jose Mourinho is unconvinced of the 26-year-old Scotland international's suitability for a top-six club. (Express) 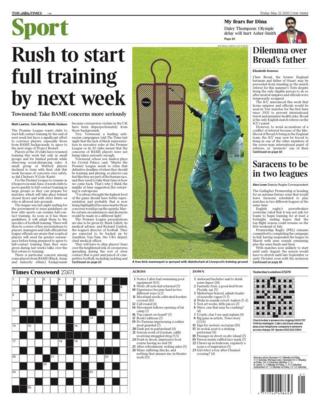