Manchester City and Germany forward Leroy Sane, 24, has the number 10 shirt reserved for him at Bayern Munich next season. (Mirror)

But the German club have told Sane he must take a 30% pay cut to complete the transfer this summer. (Bild, via Star)

Chelsea are struggling to offload Victor Moses as Inter Milan refuse to pay the £10.75m asking price for the 29-year-old Nigerian winger. (Sun)

Jorginho's agent says the Italy midfielder is happy at Chelsea and that Juventus have not made an approach for the 28-year-old. (Metro)

Premier League clubs back in training

Trabzonspor's Turkish goalkeeper and Leicester City target Ugurcan Cakir, 24, has been the subject of a 20m euros (£18m) bid from Spanish side Sevilla. (Leicester Mercury)

Manchester United would like to keep 30-year-old striker Odion Ighalo, on loan from Shanghai Shenhua, but they are "relaxed" over the Nigerian's future after Marcus Rashford's return to fitness. (Sky Sports)

Arsenal are considering a swap deal with Atletico Madrid that would see 28-year-old France striker Alexandre Lacazette moving to Spain, and compatriot Thomas Lemar, 24, coming the other way. (AS - in Spanish)

PSG have ended their interest in Napoli centre-back Kalidou Koulibaly, 28, because of his 70m euro (£63m) asking price, leaving Manchester United favourites to sign the Senegal international this summer. (Le Parisien - in French)

Gareth Bale's agent has denied reports that the Real Madrid and Wales forward, 30, has been offered to an MLS club, believed to David Beckham's Inter Miami. (ESPN Deportes - in Spanish)

Barcelona and Chile midfielder Arturo Vidal, 32, will not be part of any deal the Spanish club make with Inter Milan to sign Argentina striker Lautaro Martinez, 22. (Marca)

Spain midfielder Dani Ceballos, 23, has suggested he will end his loan spell at Arsenal at the end of the season after saying he wants to see out the final three years of his contract at Real Madrid. (TVE, via Mirror)

The EFL's leaders are confident that support for the Championship to restart, even from relegation-threatened clubs such as Middlesbrough, will mean the season resumes next month. (Times - subscription required)

Early rounds of the Carabao Cup are under threat if next season does not get under way before the beginning of September. (Telegraph - subscription required) 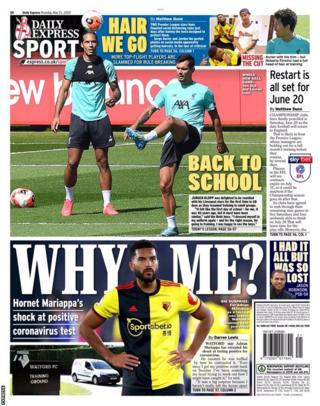 The back page of Thursday's Express