Arsenal's Gabonese striker Pierre-Emerick Aubameyang, 30, promised his grandfather before he died that he would play for Real Madrid. (Sun)

The Gunners have also been dealt a blow in their pursuit of RB Leipzig's 21-year-old French defender Dayot Upamecano after his agent said a big money move would be unlikely because of coronavirus. (Sport 1, via Metro)

Liverpool could sign Lyon's 21-year-old French midfielder Houssem Aouar, as his club have allowed him to move. (L'Equipe - in French)

In what would have been Eurovision song contest week...

Watch these 12 stunning hits (goals) and pick your favourite in semi-final one...

Shanghai Shenhua expect Nigeria striker Odion Ighalo, 30, to return from his loan spell at Manchester United in time for the start of the new Chinese Super League season, which is scheduled to begin in July. (Sky Sports)

Tottenham Hotspur and Arsenal have had a boost in their pursuit of Brazilian midfielder Willian because the 31-year-old's contract extension talks with Chelsea are over. (football.london)

The father of Brazilian midfielder Gerson has claimed Arsenal and Spurs are both keen on signing the 22-year-old from Flamengo. (ESPN - in Portuguese)

Lyon president Jean-Michel Aulas admits it will be difficult for the club to keep hold of their star players this summer - amid reported interest from Chelsea in 23-year-old French striker Moussa Dembele. (Star) 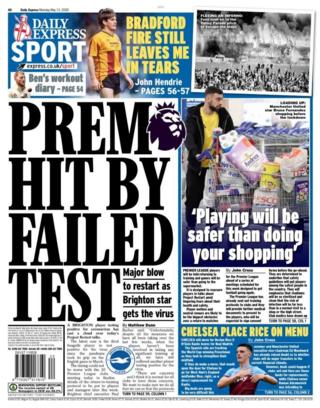 Express back page on Monday