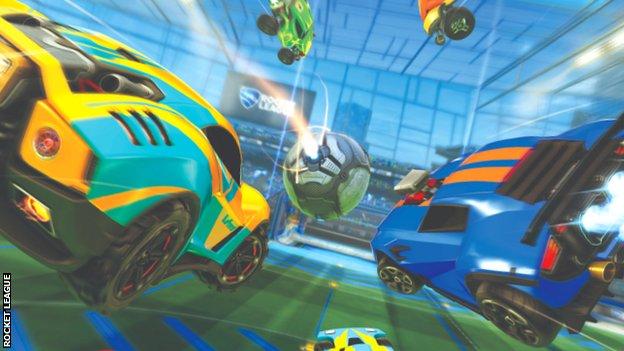 If the answer is yes to either or both of these questions, chances are you'll want to take a look at the Rocket League Spring Series on the BBC Sport website this weekend.

Claimed by some to be the most important sport video game of the past 10 years and played by 40 million people worldwide, Rocket League was born out of the Battle Cars game (or to give it its full title, Supersonic Acrobatic Rocket-Powered Battle-Cars).

Players - or in this case, teams of three players - control jet-propelled vehicles in an attempt to hit a giant ball into the other side's net, usually with a backdrop of striking cityscapes. It's something you'll only see in the virtual world.

Rocket League is truly global - the Spring Series is being held over two days in Europe, North America, Oceania and South America - and there's money to be made, with the prize fund for the Europe event roughly £100,000.

In addition, players can earn a decent wage at the top end of the Rocket League Championship Series, with personal sponsorships and advertising revenues on top of that.

Even football clubs have their own teams within Rocket League - Barcelona have a team and so do former French champions AS Monaco, with Paris St-Germain having run a team previously.

Kyle Robertson (he goes under the name Scrub Killa when he's in competition) turned 17 on Friday and is the nation's leading pro player. His father, a game-player himself, introduced him to Battle Cars at the age of just six.

"My dad could aerial and I didn't know how he did it - I couldn't grasp the concept of it," says Robertson, who became a world champion at the age of just 16 with the Renault Vitality team and was named most valuable player of the finals.

He then moved on - briefly - to the Mousesports team before setting up his own squad to attempt to qualify for this weekend's Spring Series. He fell short but is unlikely to be out of the limelight for long.

His breakthrough came at the age of 15, when he beat Cameron 'Kronovi' Bills, a player who had inspired him to get into the game, in a head-to-head contest.

"You don't just become a pro overnight - it's like a slow transition," said Robertson. "That really got me out there and I started playing in tournaments."

He remains famous for that World Championship win and a "zero-time" goal that is very searchable on the web, but he says he is known for taking care of his defensive duties. "Last season I was always in goals basically."