Real Madrid and Barcelona have joined the race to sign Borussia Dortmund and England winger Jadon Sancho. Manchester United are also keen on the 20-year-old. (Bild - in German)

Barcelona will not sell Brazil winger Philippe Coutinho for less than 100m euros (£87m). Chelsea have been linked with the 27-year-old. (Mundo Deportivo - in Spanish)

'It is mentally breaking'

What is it like being in lockdown thousands of miles from home?

Arsenal's head of football Raul Sanllehi has told club staff that transfers are not a priority this summer. (Standard)

Manchester United will reject any bids for English goalkeeper Dean Henderson during the next transfer window. The 23-year-old is currently on loan at Sheffield United. (ESPN)

Aston Villa's Spanish striker Borja Baston will return to former club Real Zaragoza when his contract expires in the summer. The 27-year-old joined Villa in January. (Sport Aragon - in Spanish)

Burnley and former England goalkeeper Joe Hart, 33, is keen on a move to Leeds United, and would be willing to take a pay cut. (Football Insider) 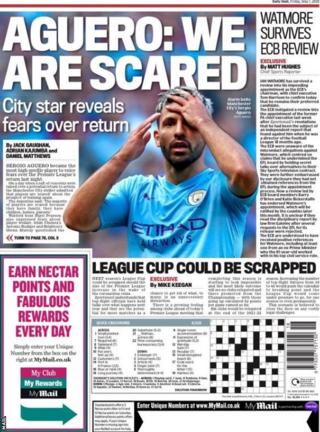