Former Tottenham boss Mauricio Pochettino is the first choice of Newcastle's prospective new owners to replace Steve Bruce as manager and they are willing to pay him £19m per year. (Sky Sports)

Liverpool have been handed a boost in their pursuit of RB Leipzig striker Timo Werner with the 24-year-old Germany international ruling out a transfer to another Bundesliga team. (Bild, in German - subscription required)

Borussia Dortmund and England winger Jadon Sancho, 20, is being offered the number seven shirt by Manchester United - currently held by Alexis Sanchez, who is out on loan - in a bid to tempt him to the club. (Mirror)

Arsenal have been told they must pay more than £25m if they want to land Celtic'sFrench forward Odsonne Edouard, 22. (Express)

Napoli forward Dries Mertens, 32, is interested in a move to London, with Chelsea still keen on the Belgium international who will be a free agent thsi summer. (Mail)

How realistic is Project Restart?

When Premier League club executives meet on Friday they will do so amid mounting unease over whether the season can resume at all...

Arsenal have reportedly made contact with Real Madrid over a potential deal for Spain left-back Sergio Reguilon. The 23-year-old is currently on loan at Sevilla. (ABC, via Star)

AC Milan will look to sell former Spain goalkeeper Pepe Reina when the transfer market re-opens. The 37-year-old is currently on loan at Aston Villa. (Calciomercato)

Nigel Pearson will remain as Watford boss until the end of the season when it resumes, despite his contract expiring in May. (Sky Sports)

Arsenal will look to make free transfers and swap deals during the summer transfer window because of the financial impact of coronavirus. (Mail)

Chelsea and Italy midfielder Jorginho, 28, says he considered leaving the Blues after only one season because of the criticism he faced from fans. (FourFourTwo)

Manchester United players have been told to wash their own kit before they return to training on 18 May, with the club's laundry facilities off limits - and players are also expected to shower at home. (Mail) 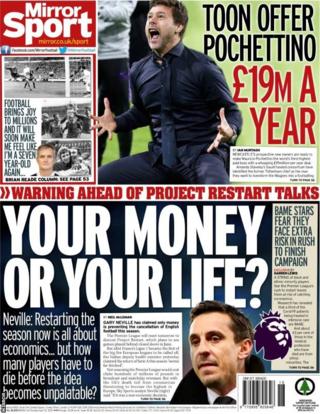