Inter Milan will ask for France forward Antoine Griezmann, 29, in exchange for striker Lautaro Martinez if Barcelona try to sign the 22-year-old Argentine from them. (La Gazzetta dello Sport, via Marca)

Barca will try to sign Sweden forward Alexander Isak, 20, from Real Sociedad if they fail to land Martinez. (Marca)

Chelsea and France midfielder N'Golo Kante, 29, is part of a three-man shortlist of transfer targets in his position drawn up by Real Madrid. (AS, via Mail)

We've picked out 20 of the most iconic football kits

Now it's time to vote for your favourite...

Uruguay striker Edinson Cavani, 33, will reject offers to return to South America when his Paris St-Germain contract expires because he wants to remain in Europe until after the 2022 World Cup. (Goal)

Former Tottenham boss Harry Redknapp says Spurs striker Harry Kane would not be making a step up by moving to Manchester United - but the England captain "might fancy a move" to Barcelona or Real Madrid "one day". (Talksport)

Arsenal and Chelsea will be offered the chance to sign Barcelona playmaker Philippe Coutinho this summer, with Bayern Munich set to turn down the chance to turn the 27-year-old Brazil international's loan spell with them into a permanent move. (Sun)

Arsenal are not considering a move for Atletico Madrid and Ghana midfielder Thomas Partey, 26. (Mirror)

Manchester United and Real Madrid will not be able to activate Borussia Dortmund and Norway striker Erling Braut Haaland's £65m release clause this summer because it does not come into effect until summer 2022. (Mirror)

United have watched Atletico Madrid midfielder Saul Niguez but would only be willing to pay £70m for the Spain international, who has a £132m buy-out clause. United hope to tempt the 25-year-old by increasing his wages from £115,000-a-week to nearer £200,000-a-week. (Sun)

Newcastle United are continuing talks with Lille over a summer move for French midfielder Boubakary Soumare. The Magpies had a January bid for the 21-year-old rejected. (Mail)

The agent of Ajax midfielder Donny van de Beek, says the 22-year-old Dutch international, who has been linked with Real Madrid and Manchester United, is attracting interest from "several clubs". (Voetbal International, via Metro)

Manchester City striker Sergio Aguero's former side Independiente are increasing their efforts to try to bring the 31-year-old Argentine back to the club. (Mirror)

Italy forward Lorenzo Insigne, 28, is set to extend his contract with Napoli until 2025. (Calciomercato) 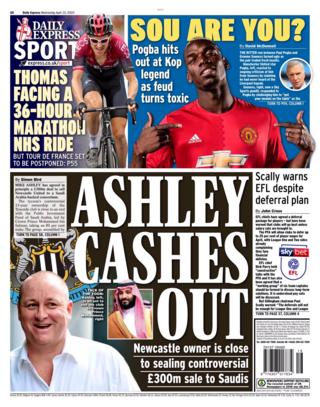