Newcastle are interested in signing Portugal midfielder Rafa Silva, 26, from Benfica but have put the move on hold because of the coronavirus crisis. (Sun)

Manchester City are considering a move for defender Boubacar Kamara, 20, with Marseille willing to let the France U21 international move for around £28m. (Express)

France midfielder Tanguy Ndombele, 23, is considering his future at Tottenham after being made to take part in an impromptu training session by manager Jose Mourinho that broke coronavirus social-distancing guidelines. (L'Equipe - in French)

Broadcaster Sky Sports will not ask for the £371m they are owed if the Premier League season is cancelled because of the coronavirus crisis. (Mail)

'I can't remember anything after the word 'cancer''

Liverpool tried to sign 21-year-old Norwegian midfielder Martin Odegaard last summer, before he made the loan switch to Real Sociedad from Real Madrid, according to his former manager Leonid Slutsky. (Metro)

West Ham and Crystal Palace are interested as Nigeria's former Sunderland striker Josh Maja, 21, considers a return to England from Bordeaux this summer. (Sun on Sunday)

Former Nigeria international Abdul Sule says Manchester United could lose compatriot Odion Ighalo, 30, to one of their major European rivals if they do not sign the striker permanently from parent club Shanghai Shenhua this summer. (Goal)

James Rodriguez's agent has spoken to Manchester United and Juventus over a potential summer move from Real Madrid for the 28-year-old Colombia forward.(AS)

English football's losses could ripple across Europe if the transfer market grinds to halt. (Sunday Telegraph)

Nemanja Matic's upturn in form has left Manchester United with no choice but to offer the 31-year-old Serb midfielder a new deal. (Mail)

Coventry City are keen to secure a new contract for 23-year-old English midfielder Zain Westbrooke, who has been linked with a move to Derby County.(Derby Telegraph)

Liverpool have been priced out of a move for Borussia Dortmund's Jadon Sancho, 20, leaving Manchester United in the leading position to sign the £88m-rated England international. (Football Insider) 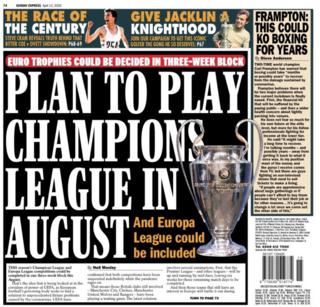