Barcelona are keen to sign Lautaro Martinez, 22, from Inter Milan but know they face competition from Real Madrid and Manchester City for the Argentina striker. (Marca)

Wolves will not sell Adama Troare for less than £70m this summer after the 24-year-old Spanish winger was linked with a move to Liverpool. (Football Insider)

What are Premier League clubs doing on pay?

A round-up of what each English top-flight club is doing to tackle the cashflow gap caused by the coronavirus crisis...

Governing body Fifa plans to extend the 2019-20 season indefinitely in order to allow each country's football authority to determine when its campaigns can finish. (The Athletic - subscription required)

Manchester United midfielder Jesse Lingard, 27, has no intention of leaving the club this summer. The England international has previously been linked with Arsenal and Everton. (Metro)

Chelsea are set to rival Arsenal for the signing of Germany defender Jerome Boateng, who is about to enter the final 12 months of his contract at Bayern Munich. (Mail)

RB Leipzig have urged 21-year-old French centre-back Dayot Upamecano, who is a reported target for Arsenal, to rethink his plans to leave this summer. (Kicker via Sun)

Tottenham and Ivory Coast right-back Serge Aurier, 27, says he would like to return to Paris St-Germain to end his career. (Canal+ Afrique via Mirror) 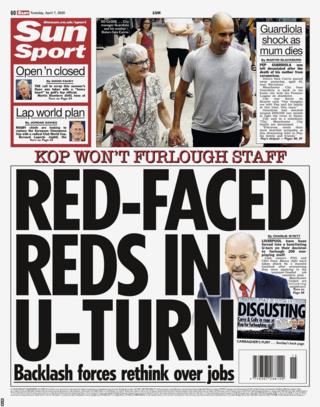 The back page of Tuesday's Sun