Arsenal are monitoring young Real Madrid forward Cesar Gelabert, 19, with the view to a potential summer transfer for the Spaniard. (Mirror)

Italian giants Juventus are prepared to offer Brazilian winger Douglas Costa, 29, to Manchester City as a makeweight in a deal to sign his compatriot Gabriel Jesus, 23. (Calcio Mercato, in Italian)

Chelsea are in negotiations with Brazilian Philippe Coutinho, 27, who is currently on loan at Bayern Munich from Barcelona, over a summer transfer. (Sun)

Meanwhile, Chelsea have been joined by Paris St-Germain in the race for Real Madrid and Moroccan defender Achraf Hakimi, 21, who is on loan at Borussia Dortmund. (Sun)

Manchester United have been told there is no chance of them signing Tottenham and England striker Harry Kane because of the length of the 26-year-old’s contract, which runs until 2024. (Manchester Evening News)

Defender Matthijs de Ligt has emerged as a transfer target for Manchester United with the 20-year-old Dutch centre-back reportedly struggling to settle at Juventus. (Express)

Newcastle United have not yet given up their pursuit of 21-year-old highly-rated Lille midfielder Boubakary Soumare, despite Real Madrid also being interested in the Frenchman. (Sport, in Spanish)

But Liverpool are also keen to sign Soumare and have opened talks on a deal. (Teamtalk) 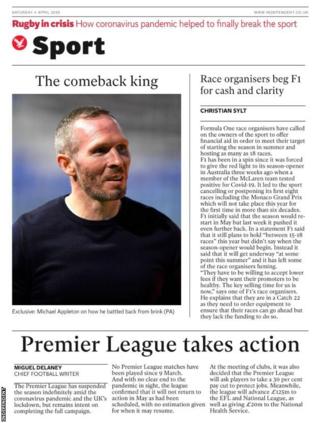