Manchester United are preparing a bid for Juventus and Netherlands defender Matthijs de Ligt, 20, with France midfielder Paul Pogba, 27, set to leave Old Trafford and go the other way. (Star)

Tottenham Hotspur are confident of keeping England striker Harry Kane, 26, even if they fail to qualify for next season's Champions League. (Mail)

Manchester United and Chelsea are set to go head to head in a battle to sign Borussia Dortmund forward Jadon Sancho, 20, after it emerged that Liverpool are not interested in the England international. (Mirror)

English midfielder Jack Grealish, 24, is still expected to leave Aston Villa this summer - unless the season is voided and Villa remain in the Premier League. (Mirror)

He was the figurehead for Ivory Coast's 'golden generation', and their remarkable powers helped bring a damaged nation together...

Manchester United could be forced into paying Chile striker Alexis Sanchez, 31, a £1.1m annual loyalty fee when he returns from his loan spell at Inter Milan. (Sun)

Arsenal are interested in Ivory Coast siblings, midfielder Hamed Traore, 20, who is on loan at Sassuolo from Empoli, and his brother Amad, 17, a winger at Atalanta. (90min.com)

European football's governing body Uefa wants the Champions League and Europa League to be completed by August and will outline its plans to resume the competitions in a video conference with the 55 member associations on Wednesday. (Express)

Uefa fears domestic football will be unable to resume until at least June, with talks now under way about extending players' contracts across the summer. (Guardian)

Leeds United will sign French goalkeeper Illan Meslier, 20, on a permanent deal from Ligue 1 side Lorient if they win promotion to the Premier League. (Mirror)

Real Madrid forward Karim Benzema, 32, has defended his comments where he compared Chelsea striker and his France team-mate Olivier Giroud, 33, to a 'go kart' on an Instagram live session. (Marca) 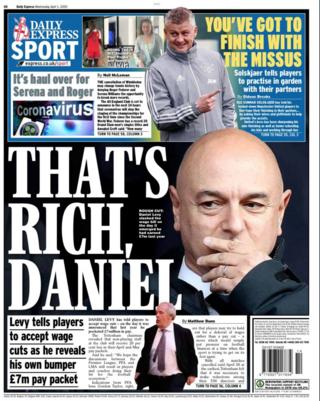 Express back page for Wednesday, 1 April 2020