Juventus plan to offer Wales midfielder Aaron Ramsey, 29, and France midfielder Adrien Rabiot, 24, to Manchester United as part of a £125m package to try to bring 26-year-old France international Paul Pogba back to the club. (La Gazzetta dello Sport, via Mail on Sunday)

Pogba's agent, Mino Raiola, says he has held talks with Juventus about the midfielder and it would not be "impossible" for him to leave Manchester United in the summer. (Sunday Telegraph)

Manchester United want to sell Pogba for £100m before Euro 2020 to raise funds to sign their transfer targets. (Sunday Mirror)

Manchester City players were asked to attend a meeting with chief executive Ferran Soriano on Saturday - the request coming within an hour of the club being banned from the Champions League for two years. (Sunday Telegraph)

Tottenham could have signed £80m-rated Aston Villa and England midfielder Jack Grealish, 24, for £6m 18 months ago, but chairman Daniel Levy turned the deal down. (Sun)

Aston Villa manager Dean Smith has hinted that the club are willing to improve Grealish's wages in a bid to persuade him to stay, and fend of interest from Manchester United. (Sunday Mirror)

When can Liverpool win the Premier League title?

Liverpool are in advanced talks to sign RB Leipzig striker Timo Werner, with the Reds set to meet the £48m release clause for the 23-year-old Germany international. (Nicolo Schira, via Sunday Express)

Arsenal left-back Kieran Tierney is a target for Leicester City boss Brendan Rodgers, who managed the 22-year-old Scotland international during his time in charge at Celtic. (90min)

Former Juventus boss Massimiliano Allegri is the leading candidate to take over at Manchester United if they decide to sack manager Ole Gunnar Solskjaer. (Sport Mediaset, via Mail on Sunday) 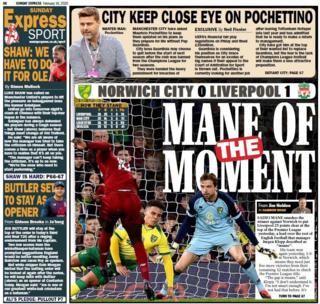