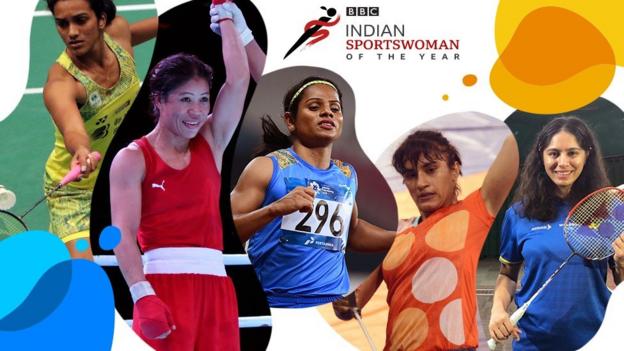 With the Tokyo Olympic Games due to begin on 24 July, the preparations for athletes around the world are starting to intensify.

Indian hopefuls are in the midst of training camps and preparations as they seek to bring a medal back to their homeland.

VOTE: View the five nominees and vote for your Indian Sportswoman of the Year here.

India has won 13 Olympic medals since the Sydney 2000 Olympics and women account for five of them.

In contrast, all 13 medals claimed by India pre-Sydney belong to men, which signifies the changing paradigm in the nation's sporting landscape.

Now, for the first time, the BBC is launching its first edition of the BBC Indian Sportswoman of the Year award, to celebrate the contribution of India's finest sportswomen.

The aim is to honour the immense contributions of Indian sportswomen and to celebrate the achievements of women in sport in the country.

Malik became the first Indian woman to win an Olympic wrestling medal, while gymnast Dipa Karmakar competed against the great Simone Biles and came close to claiming a medal in the women's vault event.

Had it not been for Indian sportswomen, the nation would have returned empty handed from the Rio Olympics - for the first time since the 1992 Olympics.

At the London Olympics in 2012, two of India's six medals were won by women, including the first ever boxing Olympic medal for an Indian woman, awarded to Mary Kom.

Other notable achievements at the London Games include Saina Nehwal becoming the first Indian to win a Olympic badminton medal (male or female).

Their efforts, among the many other untold sporting success stories, help to demonstrate the increasing contribution of Indian women in sport.

The general level of conversation surrounding those achievements, however, falls well short of that of their male counterparts.

Factors such as a male-dominated society in the country, lack of infrastructure and societal taboos have contributed to the imbalance.

Despite the odds, sportswomen in India have carved their way in sports like wrestling and boxing, long considered a male domain.

The North Indian state of Haryana is known for its skewed gender ratio with 924 girls per 1000 boys, but this tiny state has produced several women Olympians.

All this suggests the game is changing for Indian female athletes, a story that deserves to be told and discussed.

The BBC Indian Sportswoman of the Year award is part of a BBC focus on increasing women and youth sports engagement before the 2020 Tokyo Olympics.

How will the winner will be elected?

A jury selected by the BBC has compiled a shortlist of Indian sportswomen. The jury includes some of the most eminent sports journalists, experts and writers across India.

The top five sportswomen who received the maximum number of votes by jury members have been nominated for public voting online.