Barcelona have made contact with Mauricio Pochettino about him replacing Ernesto Valverde as manager. The 47-year-old Argentine is out of work after being sacked by Spurs in November. (Catalan radio station RAC1, via AS)

Chelsea have made an enquiry about Brighton centre-back Lewis Dunk, with the Seagulls valuing the 28-year-old England defender at £50m. (Times - subscription required)

Manchester United will make a £65m bid, including add-ons, for Sporting Lisbon and Portugal midfielder Bruno Fernandes, 25, after a deal offering players plus cash was rejected. (Mirror)

Manchester United are one of two clubs to have made a formal approach for Birmingham City and England Under-17 midfielder Jude Bellingham, 16. (Mirror)

Aston Villa midfielder Jack Grealish has emerged as a transfer target for Manchester City, who could face competition to sign the 24-year-old English player from local rivals Manchester United. (Metro)

Former Villa striker Gabby Agbonlahor thinks United would pay £70m for Grealish - but says the midfielder would only leave in the summer if they are relegated. (Express)

But can you name the Premier League's other highest-scoring foreign players?

Arsenal and Germany centre-back Shkodran Mustafi's agent will hold talks with Galatasaray about the 27-year-old moving to the Turkish club. (Fotomac - in Turkish)

Juventus defender Merih Demiral, who has been linked with a move to the Gunners, was taken off on a stretcher during their 2-1 win against Roma in Serie A on Sunday and manager Maurizio Sarri fears the 21-year-old Turkey international could have picked up a serious ankle injury. (Football.London)

Crystal Palace and Italian side Lazio have joined the race to sign Manchester United's 34-year-old English full-back Ashley Young, who has been offered an 18-month contract by Inter Milan. (Sun)

Chelsea are set to make Tromso and Norway Under-17 striker Bryan Fiabema, 16, their first signing since the club's transfer ban was lifted. (VG - in Norwegian) 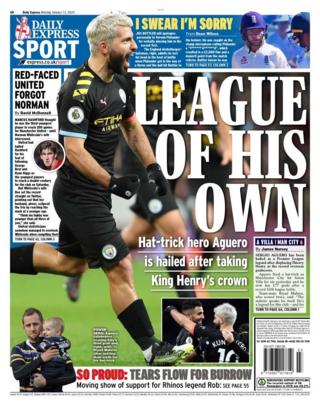